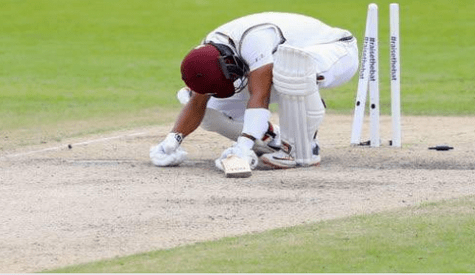 MANCHESTER (CMC): Out-of-form Shai Hope could be a doubt for the decisive third Test starting Friday, after head coach Phil Simmons admitted he was “concerned” by the right-hander’s run of low scores.

The 26-year-old has been given an extended run in the Test side despite averaging a paltry 19 over the last two years, and boasting a mediocre overall Test average of 26.

In contrast, Hope averages 52 in One-Day Internationals and an amazing 61 with eight centuries inside the last two years.

“I am concerned. [He’s] gone four innings without a score and [it’s] in contrast to how he’s played over the last five, six months in the other format,” Simmons told reporters following West Indies’ 113-run defeat in the second Test here.

“I am concerned about his form and we’ll be sitting down and chatting about that over the next couple days.”

Hope was the hero on West Indies’ last tour of England three years ago, stroking superb hundreds in each inning of the second Test at Leeds to propel his side to a series-levelling five-wicket win in the three-Test series.

Since that series, however, he has managed just three fifties in 35 innings, his highest score being an unbeaten 90 against Zimbabwe in October, 2017.

In the current series, Hope has scraped 57 runs from four innings. His failures were even more glaring in the second Test with the Windies needing major batting efforts to save the game, scoring just 25 and seven.

He and opener John Campbell are the only specialist batsmen without a half-century for the series, with the Jamaican left-hander gathering 52 runs from his four innings.

And Simmons said a decision would have to be made on both players ahead of the all-important third Test.

“It is something that we have to discuss over the next couple days and make a decision on which direction we go there,” Simmons noted.

“They haven’t fired so we’ve got to take that into consideration over the next couple of days.”

West Indies travelled with a 15-man squad along with 11 reserves for the ‘bio-secure’ series played amid the COVID-19 pandemic, and Simmons said thought would be given to drafting in players from those reserves.

“We have to consider that (calling up reserve players) and include that in our deliberations over the next couple days. Some people haven’t fired.”