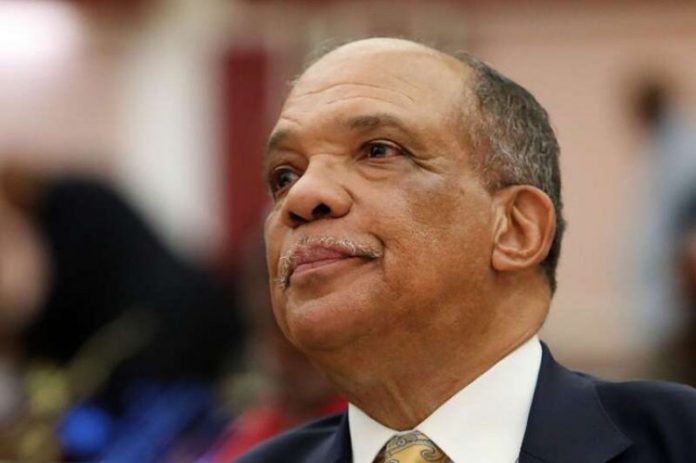 CMC – Former Bermuda Premier Ewart Brown, who is facing a string of corruption charges, has recruited a Barbadian ex-Attorney-General to his legal team.

Brown, 75, said Sir Elliott Mottley, who was Bermuda’s Attorney-General between 1995 and 1998, would help represent him following his January appearance by video link from Florida in Magistrates’ Court.

Sir Elliott, the father of Barbadian Prime Minister Mia Mottley, was appointed in 1999 to the Belize Court of Appeal and was president of the court from 2004 to 2010.

Sir Elliott, who retired from the bench last year, sat on the Court of Appeal of the Cayman Islands from 2005 to 2015.

He also spent 17 years on the Court of Appeal of the Turks and Caicos Islands and became its president.

Brown, who was premier from 2006 to 2010, was charged with 13 counts of corruption. It was alleged he unjustly received payment between 2001 and 2010 from the Lahey Clinic in Massachusetts in connection with Brown’s clinics in Bermuda.

Brown also faced allegations of corruptly obtaining US$350,500 in donations to benefit the Progressive Labour Party and the Bermuda Health Foundation between 2007 and 2010.

He was not required to enter a plea at the January appearance as the case must be heard in Supreme Court.

The case is expected to go to the Supreme Court at the April arraignments session.

Brown was named as a “non-party co-conspirator” in a 2017 lawsuit brought by the former One Bermuda Alliance government against the Lahey Clinic.

The legal action in Boston against Lahey Clinic alleged there was a conspiracy between the health provider and Brown to conduct excessive medical scans.

Both Brown and the Lahey Clinic denied the allegations.

The case was dismissed by Judge Indira Talwani of the US District Court in March 2018 because Bermuda had not shown that it suffered any injuries in the US.

But a police investigation at home into allegations of unnecessary medical scans in Bermuda continued.