Sir Kennedy describes Ambassador Amory as a “gentleman of honour” 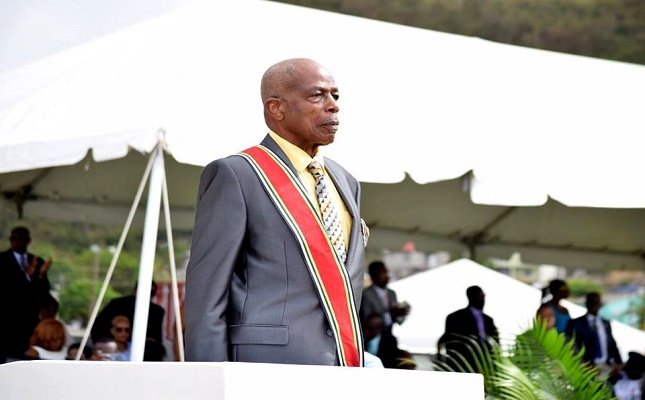 Sir Kennedy’s statement was made during a Special Sitting of the Nevis Island Assembly on Tuesday, April 19, 2022. The Special Sitting was organized to pay tribute to the legacy and contributions of Ambassador Amory, who served as a member of the Nevis Island Assembly from 1992 to 2017. He also bears the distinction of being the longest-serving Premier of Nevis from 1992 to 2006 and again from 2013 to 2017.

Sir Kennedy, the Federation’s first Prime Minister (1983-1995), recalled then Premier Amory’s 1993 Independence address where he called for renewed efforts to unify the people of St. Kitts and Nevis.

“He [Premier Amory] emphasized that Kittitians and Nevisians need to ensure that the Federation develops upon lines that are mutually beneficial and which would allow each island to achieve its full potential,” Sir Kennedy stated, noting that the Nevis Premier urged persons to be wise in managing their resources.

“Let me now close by saying that the late Premier Amory was a stalwart champion of the Nevisian people and a statesman of St. Kitts and Nevis,” Sir Kennedy added. “He earned the trust, respect, and love of the people of Nevis and St. Kitts. His name and legacy will live on forever.”
Ambassador Amory’s service to St. Kitts and Nevis also extended to the Federal level. He was elected to the Federal Parliament from 1989 to 2020. From 2015 to 2020, His Excellency Amory joined the Federal Government and served as Senior Minister and Minister responsible for Labour, Nevis Affairs and Ecclesiastical Affairs.