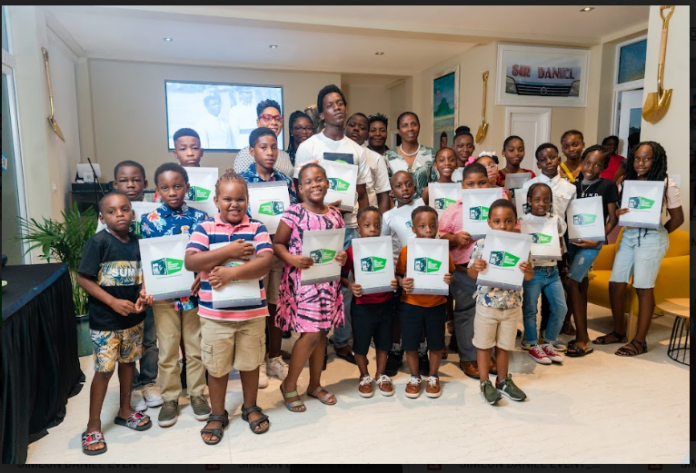 This year marks the 10th anniversary of Sir Simeon’s passing and also the 10th year since he was named a National Hero.

Additionally, 2022 marks the 10th anniversary of the event, which is normally celebrated on National Heroes Day on the open playfield in Barnes Ghaut.

Though the twin-island Federation was adversely impacted by the COVID-19 pandemic in 2020 and 2021, the Foundation maintained its annual donation to the students in Barnes Ghaut.

The event is recognized by the Foundation to celebrate the former Premier’s birth anniversary – August 22 – who has been dubbed “The Founding Father of Modern Nevis”.

Notably, Sir Simeon was the first Premier of Nevis in 1983 and he was instrumental in the formation of several institutions on the island as well as improving the lives of its citizens and residents by establishing a water development programme, upgrading of telecommunications, formation of the Nevis Sixth Form College and the establishment of the Bank of Nevis.

While speaking at the Ceremony, Dr. Janice Daniel-Hodge underscored that the event highlighted her father’s important contributions to the island in the areas of development and education.

“I think you are in a very good place, understanding that we are here this evening because our father, the late Dr. Simeon Daniel, was very proud of this village. And before he passed, he would have expressed his desire to have a museum established so that not only the people of Barns Ghaut, but people from all over, can come and learn more about the history of Nevis,” explained Dr. Daniel-Hodge.

In 2021, the Foundation had opened the Sir Simeon Daniel Museum, which immortalized his work, legacy and contributions to the development of Nevis.

A full-bodied bronze statue of the great former Premier currently stands in the Museum.