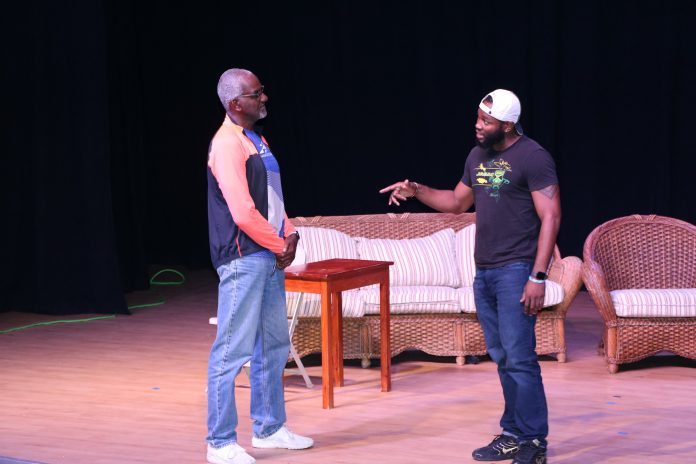 NIA CHARLESTOWN NEVIS (April 06, 2021) – – Six nationals and residents have been tipped by MSR Media producer Mr. Philippe Martinez and his team for speaking roles in upcoming movies to be filmed on Nevis.

Mr. Martinez recently visited the MSR Media Acting Academy, which was launched in Nevis late February, and said he was impressed with how well the aspiring actors are progressing.

“We had each of the students perform a short scene and frankly, considering the Academy only opened two weeks ago…the surprise was we saw natural [talent] and people with real personalities, and none of them were bad.

“Some are at different levels, and have different strengths, but you can see what you can do with it.

“I can tell you for sure that with a lot of work and training we’re going to take six speaking parts from those guys. We walked away knowing we would get six speaking parts out of those auditions, which is fantastic,” he said in an interview with the Department of Information while at the Indian Summer Restaurant.

The group of about 20 locals and residents garnered critical feedback during the recent interactive session with Mr. Martinez, actor Mr. Jeff Fahey, and Mr. Tom Peyton, who will direct ‘Assailant’, MSR’s next film on the island.

The film professionals advised the acting students to be true to themselves and that their differences are their best asset.

“The reason we chose them is because we thought they had something different,” Mr. Martinez noted.

He congratulated those selected to make their acting debut in upcoming movies.

“We’ve got a grand opportunity put in our laps with the creation of a film industry on Nevis.

“The Acting Academy is a great leap forward for the art form. We are taking some very raw talent and working with them and they have responded well, so much kudos to the actors who have applied themselves.

“Congrats to all those getting the opportunity to strut their stuff for the first time on camera. This is absolutely huge,” he said.

Mr. Crooke commended MSR Media for its role in the development of a film industry in Nevis and allowing locals to benefit through the Acting Academy.

“We are creating a bed of talent on the acting side and so when people want to make movies here there is already a pool of talent to pick from,” he said.

He is hopeful that the Academy can be expanded in the future to include technical training for those who wish to be behind the camera.

MSR Media recently wrapped filming the romantic comedy “One Year Off” on the island and is preparing to begin shooting its second movie, the thriller “Assailant” mid-April.

MSR Media intends to film six movies on Nevis over the next 12 months, after initially signing a two-film production deal with the Nevis Island Administration (NIA) in January 2021.