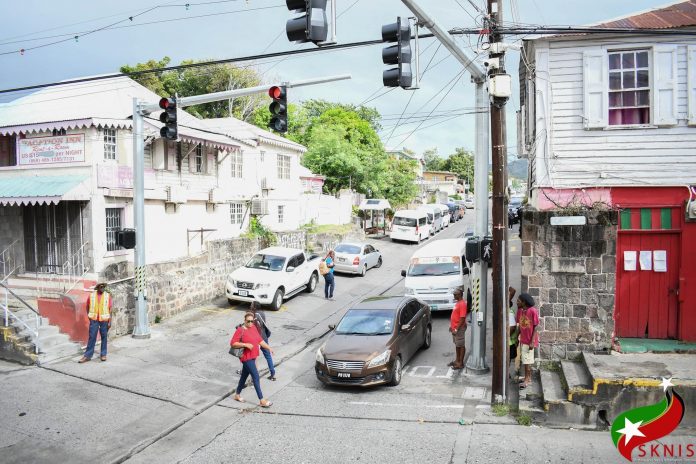 St. Kitts and Nevis (WINN): Six new traffic lights will be commissioned today (March 22) at 4:30 p.m., and changes to the flow in traffic within the central Basseterre area are expected to follow.

Some significant changes include restricting turns coming out of Port Zante West and East.

“At Port Zante West and Port Zante East, the idea behind the traffic lights was to push the traffic away from the centre of Basseterre. At Port Zante West, when you exit Port Zante, you were to go towards the cenotaph, so that’s a left turn. At Port Zante East, the idea is that when you exit Port Zante, then you make your way towards the Bird Rock intersection, so that will be right. You will only be allowed to go right, that is, make your way up the Bay Road and find a way from there; those are the restrictions in that area,” said Livingston Pemberton, Engineer with Public Works Department.

With the commission of the lights, there will be restrictions on certain turns throughout Basseterre, changing the entire flow of the City.

“There might be a few restrictions in terms of the no right turns, and the reason being is the impact of not having a turning lane to turn right [and] hampers the whole efficiency of the junction. So most of our junctions that we’re commissioning does not have a right turn lane. One that does is the Bay Road/College street, so you have to impose restrictions on those to allow a more free and efficient traffic signal operation,” explained Jamaican Traffic Lights Specialist and Engineer Barrington Cross from Synergy Engineering.

One turn, in particular, is the right turn into Church Street from Cayon Street; that turn will not be allowed.

“If you’re coming from the cemetery area, and you’re coming across Cayon street, you will recognise that if you turn into Church Street, you will be turning across traffic; that will create a conflict, and we are trying to minimise or eliminate those conflicts. So please note, as I said earlier, it is very important that you plan your routes so that you know where you are leaving from, where you want to end up, and so your plan your route. Know where you can turn, and we cannot turn. It’s a similar situation on West Independence Square Street; you cannot make a right there because of the signalisation of the traffic lights, so the same thing will apply when we commission the lights at Cayon and College Street.”

Additionally, the flow of traffic will be further impacted with the installation of yellow lines throughout the Basseterre area that would restrict parking options and help with the traffic flow in the city, according to Pemberton.

The engineer said the department has identified alternative parking on the outskirts of Basseterre on the eastern side of the Newtown playfield in the east and Greenlands Park area in the West and paid parking on Port Zante.

Pemberton also shared that after this installation, the government will make provisions for efficient trafficking of people within Basseterre despite having to park on the outskirts.

“We want to let you know that there is a master plan that is just awaiting approval. And once that is approved, then you will recognise that there will be easy access into Basseterre even though you may have to park on the outskirts.”

The engineer encouraged people to carpool if it was not necessary for individuals to drive.

The engineer and Sergeant Henry from the traffic department reminded the public that CCTVs on the traffic lights are operational. Anyone breaking the law and running the red light may be ticketed for that offence.