SKN and other Caribbean Nations Joined Inaugural Summit For Democracy 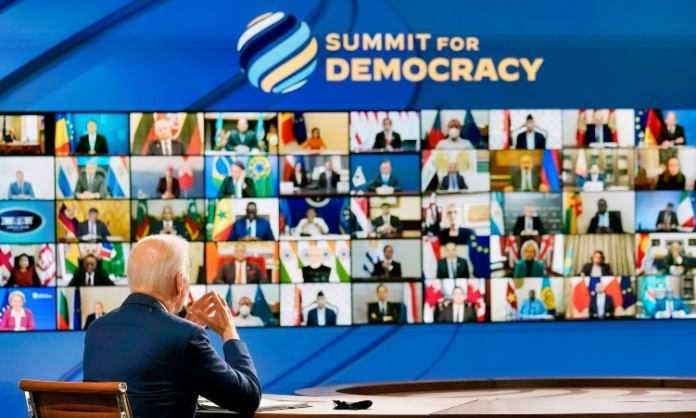 In his address to the summit, Prime Minister the Hon Dr Timothy Harris highlighted that democracy is not autonomous.

“The institutions of a participatory democracy are not self-sustaining, and consequently, they must be buttressed by the deliberate positioning of institutional safeguards. The strengthening of democracy is part of the bulwark against authoritarian rule, a commitment to askew authoritarian rule, adhere to the separation of powers, maintain transparency, and an accountable electoral process are all imperatives for a democracy wedded to the rule of law.”

Dr Harris emphasised three pillars necessary to empower people existing in a democratic state to understand their value and the value of others.

“The strengthening of democracy, defending against authoritarianism and fighting corruption is a trilogy of ideals hinged on the respect for human rights and the dignity of human life. All three are grounded in an imperative that respects and recognises that every life is imbued with intrinsic value. All who govern must ensure that the governed are empowered with every opportunity to maximise this intrinsic value and achieve self-actualisation, the promise of a true participatory democracy.”

The summit presented a host of other topics for discussion, including, but not limited to, continued support for the development and investment in youth, gender equality, education, continued free and fair elections, eliminating poverty, fighting against corruption and fighting for fundamental human rights, which were just some of the significant pledges made by world leaders during the two-day summit.

Prime Minister of Barbados, the Hon Mia Mottley, used the opportunity to call for the support of Small Island Developing States (SIDS) who suffer from the ravages of climate change and other external shocks.

“Small Island Developing States like ours remain inherently vulnerable to all kinds of external and existential shocks, be they the climate crisis, the pandemic, global inflation, disruption of the global supply chains just to mention a few. These constitute ever-present threats to our democracy. And what are the facts; we hardly make any contribution to carbon emissions; we are a victim of our success in that we’re denied access to concessional financing, even though we’re not a developed nation. The international financial institutions remain reluctant to provide access to concessional funding on the basis of vulnerability as a relevant criterion. This puts us at risk of pauperisation should one of those shocks to which I referred materialise.”

The Prime Minister said there should be a focus on providing and supporting financial equality as a pillar for democracy.

“For you must believe me when I say, there can be no true democracy without the development of our people. A people deprived of an economic or social existence will have no appetite for democratic ideals. They will not find it possible to protest the breach of human rights in the way that we would like. Countries with high levels of democracy can boast of high human capital accumulation, lower inflation, lower levels of political instability and lower levels of corruption, as well as high economic freedom. Democracy, my friends, must be rooted in the elimination of poverty and the assurance of freedoms. And fundamentally, freedom is about one’s right to choose, and hence, it is inextricably linked to the elimination of poverty.”

In his remarks, the Hon Gaston Browne, Prime Minister of Antigua and Barbuda, also addressed the need for economic support in Small Island Developing States as being a pillar for the survival of their democracy.

“At the outset, let me state that democracy is not sustainable without economic and social development, to which human and political rights are essential but not sufficient. Global iniquity and practices which perpetuate poverty, unemployment and crime have contributed to weakened democracies and to the collapse of many of them. That is why even as we all recommit to eradicating corruption, ending gerrymandering of electoral boundaries, halting arbitrary arrests and preventing the repression of free speech, we should recognise that these conditions, while imperative, must be accompanied by concrete measures to deliver economic progress and social improvements.”