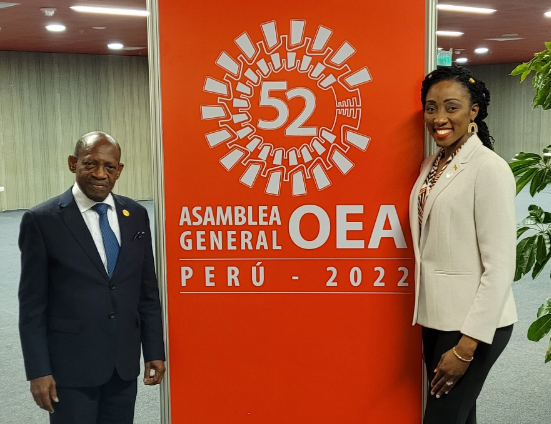 St. Kitts and Nevis (WINN): Senior government officials have travelled to the Peruvian capital city Lima, for the 52nd Regular Session of the Organisation of American States (OAS) General Assembly.

Minister of Foreign Affairs, the Right Honourable Dr. Denzil Llewellyn Douglas and Mrs. Sonia Boddie Thompson, Counsellor and Alternate Representative of the Permanent Mission of St.Kitts and Nevis to the Organisation of American States (OAS) are in the coastal city for the prestigious event.

Dr. Douglas will deliver a presentation sharing the foreign policy agenda for St.Kitts and Nevis and will reaffirm the country’s commitment to fulfil the mandate of the OAS.

During the period October 05 to 07, Douglas and Boddie-Thompson will engage in dialogue with other OAS member delegates on the topics of; human rights, human development, security and strengthening democracy.

The OAS annual General Assembly is being hosted in person for the first time since the COVID-19 Pandemic. The session is being held at the Lima Convention Centre under the theme, “Together against Inequality and Discrimination.”

The OAS was established in1948 with the signing of the Charter of the OAS in Bogota, Columbia and was fully operationalised in December 1951. The OAS was established to achieve an “order of peace and justice, to promote solidarity, to strengthen collaboration and to defend the sovereignty, territorial integrity and the independence of all 35 member states.