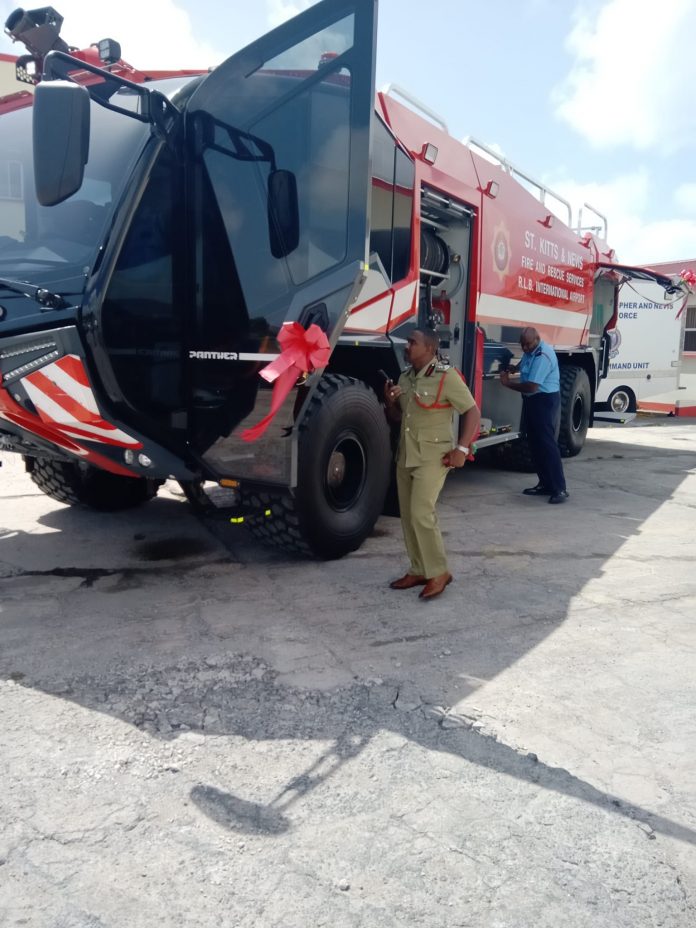 St. Kitts and Nevis (WINN): The St Kitts and Nevis Fire and Rescue Services, courtesy of the Republic of China (Taiwan), has received a new fire tender adding to its existing fleet of fire engines. The fire tender was commissioned during a ceremony on Tuesday morning (July 19).

At the ceremonial handover, Acting Fire Chief Garfield Hodge said, “this magnificent fire fighting machine, I am advised, is the very latest model of its kind and is the first 2022 6×6 Panther [Crash Fire Tender]. Its addition to our fleet of Aircraft Firefighting and Rescue appliances has significantly enhanced our firefighting and rescue capacity. This, of course, could not have been possible had it not been for the swift and decisive response of our Federal Government of St. Kitts-Nevis and the good people and Government of the Republic of China on Taiwan.”

The new fire tender will be based at the Robert Llewellyn Bradshaw International Airport, and according to the Acting Fire Chief, the fire tender is quite capable of combating fires at the airport.

“This brand new state-of-the-art 6×6 PANTHER is primarily intended to actively combat aircraft fires and to assist and protect the airport rescue team during [the] evacuation of passengers. It has the capacity to deliver fast and safe response as well as effective agent discharge, which are essential for a successful operation.”

The Fire and Rescue Services maintains an internationally mandatory presence and operation at the Robert Llewellyn Bradshaw International Airport and the Vance W Amory International Airport. According to Hodge, in December 2021, it became urgently necessary to have another Aircraft Rescue and Fire Fighting truck added to the fleet of airport fire fighting appliances to maintain compliant status with the regulations of the International Civil Aviation Organisation (ICAO).

Hodge explained, “Resultantly, the Ministry of National Security immediately responded and together we were able to identify and procure this brand new state-of-the-art Aircraft Rescue & Fire Fighting 6×6 Panther, built in accordance to ICAO standards by Rosenbauer in Austria. The urgent procurement of this amazing Fire Fighting machine was facilitated by INDOCOM, the regional agent for Rosenbauer, based in Trinidad. IDOCOM has been a very good friend and partner over the years in not only aiding in the procurement and maintenance of our fleet of Fire Appliances but also in monetarily assisting our firefighting efforts in the Federation.”

The Fire Chief also disclosed that Engineer Mr David Beard, Manager-Service Department of INDOCOM, has been on the island over the past week assisting with the commissioning process, while also offering technical assistance with all other fire engines.

His Excellency Ambassador Michael Lin, resident Ambassador of the Republic of China on Taiwan was in attendance at the ceremony. He said, “The new fire tender represents the strong and continued friendship between the people and the Government of St Kitts and Nevis and the Republic of China on Taiwan. In 2014, Taiwan donated 10 police cars to the Royal Police Force, then in 2019, another 12 police cars were donated to the Royal Police Force. From 2018 to 2022 we also helped to set up the new CCTV road surveillance system in St. Kitts as well as in Nevis. Therefore, it further exemplifies Taiwan’s substantial support for the Federation; substantial efforts in providing a safe and secure environment for its own people and visitors likewise.”

Permanent Secretary in the Ministry of National Security, Osmond Petty, said this is the third fire tender that has been commissioned within the last seven years. He said Prime Minister Dr Timothy Harris has been a staunch supporter of the fire services, which has been reflected in the budget. Petty said the Government would continue to provide the necessary support to the fire services of St. Kitts and Nevis. The Permanent Secretary also thanked the Embassy and Government of the Republic of China in Taiwan for donating the entire cost, US $750,000, for the purchasing and shipping of the fire tender.