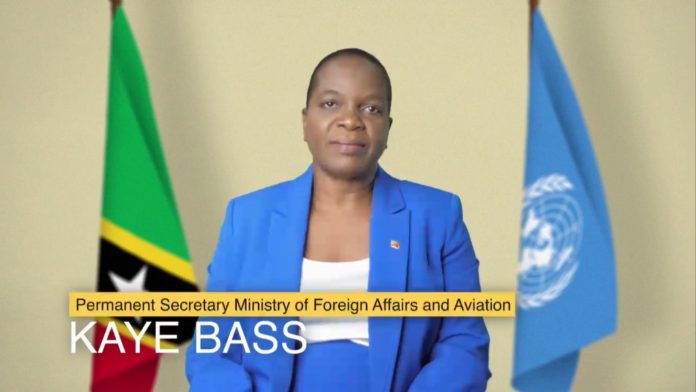 St Kitts and Nevis (WINN): Permanent Secretary in the Ministry of Foreign Affairs and Aviation, Ms. Kaye Bass gave a report on St. Kitts-Nevis at the 3rd cycle of the 37th Session of Universal Periodic Review, a committee made up of representatives of the United Nations (UN), which reviews the Human Rights efforts in Countries in the United Nations.

Bass gave a report of the Federation’s battle against COVID-19, highlighting the protocols that have curbed the impact of the virus, as well as the EC$120 million stimulus disbursed to help people deal with the economic fallout.

The hit on the tourism industry was also brought forth as Bass reported that tourism accounted for 60% of Gross Domestic Product (GDP), which as a result of the pandemic fell off by 35 percent.

In response to the St Kitts and Nevis report, members of the committee highlighted several areas that the country should address:

2. Ratify the optional protocol for the Convention on the rights of the child

3. Increase the number of women in decision making roles

4. Develop Legislation that prohibits discrimination against persons living with disabilities

5. Strengthen laws to combat sexual abuse against children and gender-based violence among others.

6. And enact comprehensive anti-discrimination legislation which will specifically prohibit discrimination and violence based on sexual orientation and gender identity.