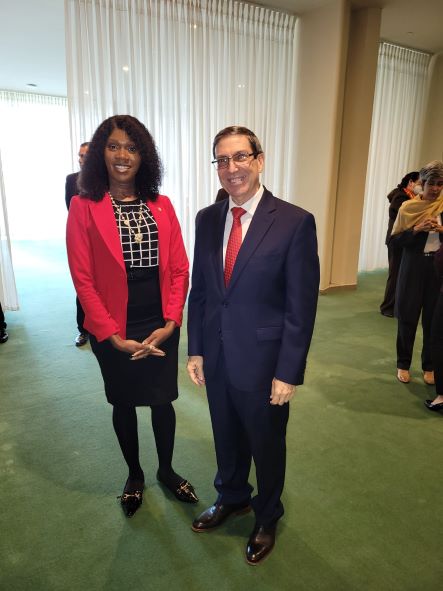 St. Kitts and Nevis (WINN) – Cuba has been under a United States trade embargo for 60 years.

Sixty years ago, President John F Kennedy introduced Proclamation 3447, Embargo on All Trade with Cuba, designed to isolate Cuba and stop the spread of what was then described as “Sino-Soviet Communism”.

The United Nations (UN) estimates that the embargo has cost Cuba over US$130bn in damages, compounded by the penalties imposed by the US Office of Foreign Assets Control (OFAC) on Cuba’s allies and investors.

The boycott was over the White House’s move to exclude Cuba, Venezuela and Nicaragua from the Summit. Leaders in the region who attended, including Barbados Prime Minister, Hon. Mia Mottley condemned the exclusion.

Ambassador Nerys Dockery, the new Permanent Representative of St Kitts and Nevis to the United Nations, gave her maiden speech in support of the Resolution “Necessity of ending the economic, commercial and financial embargo imposed by the United States of America against Cuba” at the UN on November 3.

In her address, she referenced the previous steps made by Cuba and the US to normalise diplomatic relations, which included the removal of Cuba from the list of state sponsors of terrorism in 2015 but lamented the reversals made since the historic turning point in the easing of tensions between the neighbouring countries.

“St. Kitts and Nevis finds it regrettable that several reversals were made since that brief period of detente, and the blockade is still a reality for Cuban people, and it denounces the imposition of unilateral, coercive measures against a sovereign state. This unjust embargo drives a stake through the heart of international law, makes a mockery of the principles of sovereignty and non-intervention that governs interstate relations, which are protected by the United Nations Charter and severely impedes Cuba’s ability to fully engage the international community to adequately provide basic public services for its people and thereby its aspirations for meeting the Sustainable Development Goals.”

The Ambassador said the embargo does not just threaten Cuba’s economy but endangers the country’s ability, and by and large the region’s ability, to reach the 2030 UN Sustainable Development Goals.

“We consider the financial, commercial and economic embargo as an extreme burden on the development, well-being and stability of our brothers and sisters in Cuba and, indeed, the entire Caribbean. The socio-economic impact on the economy [of] that small island developing state is quite profound and unfair to the people of Cuba. In trying to achieve the 2030 agenda, this is a critical time for the world, given the cumulative impact of two years of the COVID-19 pandemic and the disproportionate and deleterious impacts and risks presented by intensified geopolitical hostilities in Ukraine and the global crises in food, fuel and transportation it has fermented.”

In a report from the Secretary-General, Barbados, in a statement, expressed that the embargo goes against international law, which allows for the freedom of international trade –

“The Government of Barbados remains fully committed to the Charter of the United Nations and international law, particularly the principles of sovereign equality, non-intervention and non-interference in the internal affairs of States, and freedom of international trade and navigation for all Member States.”

Ambassador Dockery commended the Biden administration and the work they have been doing to ease the economic burden on Cuba. Still, she said they need to go further in addressing the more harmful aspects of the blockade.

“These coercive measures, coupled with the harsh economic and social conditions caused by the pandemic, have produced much despair among the people and have led to a new migrant exodus from Cuba. That is why St. Kitts and Nevis once again calls upon the United States to end the unjust embargo. It is said that an unjust law is no law at all and in the words of one of America’s most notable Founding Fathers, Thomas Jefferson, the international community not only has a right to disobey it but we are obliged so to do. For the moment, we choose only to express our righteous indignation as its imposition.”

During his first address to the United Nations General Assembly, Prime Minister Hon. Dr Terrance Drew spoke of the Federation’s partnership with Cuba and called for the end of the US trade embargo.

Dr Drew shared how St. Kitts and Nevis has benefitted from a positive relationship with Cuba.

“I can also speak first-hand to our friendship with the Republic of Cuba and what it means to me and its value to the people of St. Kitts and Nevis. Cuba has partnered with my own country and many in the developing world in healthcare, education, training and agriculture. We call for an end to the decades-long embargo imposed against Cuba. My country encourages meaningful dialogue in resolving these and other conflicts in countries that are targeted by unfair sanctions that create enduring external and internal hardships,” said the Prime Minister during the 77th Session of the UNGA on September 23, 2022.

Prime Minister of Grenada, Hon. Dickon Mitchell shared similar sentiments during his speech at the 77th Session of the UNGA.

“Grenada is satisfied that the removal of the US-imposed economic, commercial and financial blockade against Cuba will facilitate economic and social change there. Additionally, we call for Cuba to be removed from the US State Department’s list of countries that are core sponsors of terrorism.”

Ambassador Dockery ended her speech with a question to the Assembly, “what justifies the continuation of the outdated embargo on Cuba?”

The new Permanent Representative of St Kitts and Nevis to the United Nations presented her credentials to UN Secretary-General António Guterres in October 2022.