St. Kitts and Nevis (WINN) – One hundred and thirty-seven cases were reported in five days, signalling the increase of cases within the community.

Cases were steadily declining since the lockdown in July and health officials were confident in containing the spread of the virus. For the last month, before this past week, cases were recorded in the single digits, with some days recording zero cases.

Currently, there are 193 active cases, and seven of those are reportedly in hospital.

In the most recent press briefing from the National Emergency Operations Center PRO Dr Marrisa Carty gave a breakdown of where cases were most prevalent in the community.

St. George Parrish remains the top hot spot in St. Kitts as it relates to the amount of confirmed COVID-19 cases recorded in the last three months.

“Please note that it is the more densely populated areas that are most affected,” explained Dr Carty. 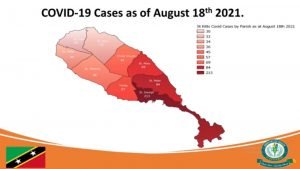 From August 16 – 19, the vaccination doses administered were 347 doses over the four days. Seventy-eight were first doses, and 269 were second.

The target officials are trying to achieve; 33,037 adults of St. Kitts and Nevis.