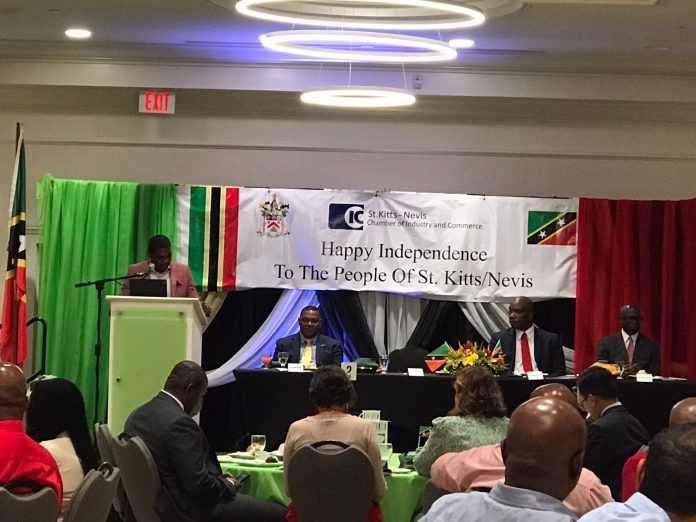 The luncheon, held under the theme, Renewal of Public-Private Partnership: Driving Growth, Building Resilience, was the first since the change in the SKNCIC’s executive and the new President, Michael Davis, in his remarks, provided an update on  the initiatives and discussions being undertaken by the Chamber to effect positive change in the economic situation in the Federation.

Davis said discussions were held with Rt Hon Dr Denzil Douglas, Minister of International Trade, Industry, Commerce and Consumer Affairs, Economic Development and Investment, about the Chamber’s revised manufacturing strategy. The Chamber President said he was optimistic that the strategy would be adopted in an attempt to improve local manufacturing.

The Chamber’s President mentioned in his welcome remarks discussions at the recent AfriCaribbean Trade And Investment Forum held in Barbados about creating horizontal partnerships with other Chambers in the region and Africa.

“Most notably, the Barbados Chamber of Commerce, where we discuss the plans of an MOU to leverage some of the strengths of the Barbados Chamber within our local Secretariat. I believe that this will be of great value [to] our local chamber and the support that we’ll be able to offer to our members and stakeholders. I was also able to meet with the CEO of the Federation of West African Chamber of Commerce to discuss the possibilities of leveraging their over 50 Member States’ chambers. This, I believe, will open St. Kitts business to a lot of [opportunities] that are available within the African market,”  SKNCIC’s President, Michael Davis.

Dr Drew highlighted that St. Kitts and Nevis would have to chart a new economic course for the country and expressed his intent to deepen the ties between the Public and Private Sectors, calling for regular meetings between stakeholders of the economy.

“The Government will engage the Chamber and other stakeholders across the Federation on the major policy and legislative issues to be addressed by our administration over the coming months. Today, I can confirm our Government’s intention to continue to provide tax and other concessions to businesses based on the relevant legislation and current tax incentive regime. There’s no doubt however that we must also have important conversations on the way forward as it relates to tax policy, good tax governance, and transparency.”

The Prime Minister continued, “in addition to these conversations, we must consider the many great opportunities for the Public and Private sectors to form a stronger alliance in partnership in the development of this great Federation of ours. I say this as I am inspired by opportunities that are emerging from some of our existing challenges. We have an opportunity to work together to address our infrastructure gaps and urgently tackle food insecurity.”

Dr Drew highlighted some priority areas for the Government and private sector, including Tourism, Agriculture and more.

“The major areas of interest of my Government that are filled with opportunities under a new partnership framework include the following; Tourism, as is obvious, with specific focus on our need to invest more in the Tourism product and build out the Tourism plant.

Agriculture – there are opportunities for better alignment with the goals of food security and the development of the green and blue economy.

The orange economy, that [is an] economy that we have not delved much into as yet.

Manufacturing [and] renewable energy, as we chart a course to become the first sustainable island state in the Caribbean, would also be a pillar of advancement and economic growth in the renewed economy that we seek to establish.

Digitalisation, which is very important as we seek to establish an E-government, e-education, [and] e-healthcare so that our economy will be very efficient and effective in addressing the issues that we face.

Education and Healthcare are also two important cross-cutting areas for collaboration as we seek, in the next five years, to establish Universal Healthcare, build a climate-smart hospital, build the Basseterre High School and upgrade our learning institutions to modern institutions to prepare our students for the 21st century.”

At the Luncheon, Kevin Taylor, Chairman of the St. Kitts Manufacturing Division of the SKNCIC, gave the invocations; SKNCIC Director Kevin Thompson gave the vote of thanks, and Trevor Blake, Vice-President of the SKNCIC, was the Master of Ceremony.