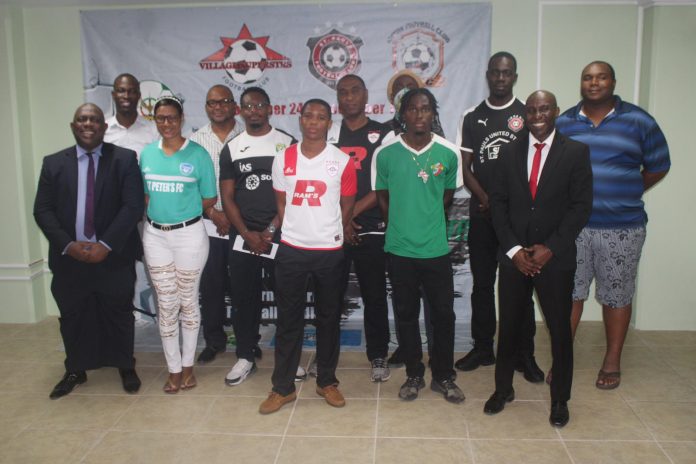 Players and teams that excelled in the most recent season of the various St. Kitts and Nevis Football Association leagues received their monetary prizes and awards on Monday at the VIP Lounge of the Warner Park Football Stadium. The award presentation was delayed at the end of the season last month due to late shipment arrivals of the prizes.

Before the prizes were presented, President of the SKNFA Mr. Anthony Johnson commended
the players and teams for their participation in the leagues. He had high praises for the outcome of the inaugural Super Six Playoffs, which replaced the longstanding Final Four Playoffs. Mr. Johnson said the Final Four had outlived its usefulness. “We had up to then a Final Four competition which was in place for almost 20 years, which had outlived its usefulness,” he said.

“We needed to do something different. More importantly we felt that the level of competition that existed between the clubs at the Premier League level was such that there was need for the expansion of the tournament.” He said some people questioned the motive for the change and felt there was an ulterior motive, but now they concede that the Super Six Playoffs was a great idea.

“I think that what happened a few months ago at Warner Park is testimony to the fact, as have been said to me by a lot of people—Super Six is the best thing ever,” he said.
Mr. Johnson also pointed out that the grand prize money of $50,000 to the winning team: S.L. Horsfords St. Pauls F.C. is a big increase from $8,000 almost 12 years ago when he first became president of the SKNFA. The prize money was increased overtime to $20,000 before the big increase to $50,000. Players of the Match in the Premier Division were awarded $500 and $200 in Division One and the Women’s League.

Mr. Stanley Jacobs, SKNFA General Secretary pointed out that St. Kitts and Nevis is one of the very few countries in the Caribbean to complete their football leagues last year and thanked the government, the COVID-19 Task Force and football officials for making this possible. He highlighted the fact that the Super Six Tournament is by far the most lucrative sporting event in St. Kitts and Nevis history. Judging from the response from patrons, the tournament is here to stay. “Since I have been at the Football Association, we have had the winnings being paid out during the course of the following season; sometimes we are struggling to pay the winnings. But this year, we are going to make history that before kickoff of the 2021 season we will ensure that all the monetary awards from 2019-2020 and all the special awards are paid out,” he said.

The special award winners this year in the Youth League are: MVP of the U13 Boys Trevino Charles of Village Superstars and Shervin King who was MVP for both the U15 and U17 Boys.

The awards presentation marks the official end to the 2019-2020 season and prepares for the start of the 2021 football season due to commence on Wednesday, February 3 with the President’s Cup. That match will start at 7pm between St. Paul’s and St. Peters F.C.