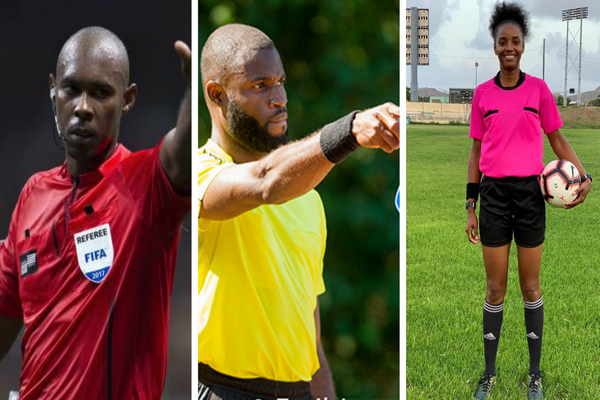 Two football match officials from St. Kitts and Nevis were featured in FIFA World Cup Qualifier matches on Thursday night. Kimbell Ward was a fourth official in the match between El Salvador and Panama, held in San Salvador, El Salvador, while Trisley Bassue was a fourth official in the matchup between the USA and Jamaica in Austin, Texas. In addition to these major accomplishments, the women officials from the Federation are also shining. Shandor Wilkinson has been selected as a match official for the 2021 Concacaf Women’s Under 17 Qualifier slated for the IMG Stadium in Florida, USA from October 20 to November 1, 2021.

Chairman of the Referees Committee on the Executive of the St. Kitts and Nevis Football Association (SKNFA), John Bergan, said these selections are testament to the SKNFA’s development of referees and match officials over the years. “The SKNFA has invested heavily in refereeing and it is seen now on the field of play. Presently we have six match officials, three referees and three assistant referees appointed FIFA officials,” he said. “I must give commendation to the former SKNFA executive lead by the late Anthony Johnson. The Referee Department, managed by Mr. Malcom Ramsey has done a tremendous job in getting the performance of our referees to an elite level over the past couple of years.”

Mr. Ramsey is assisted by Delroy Jeffers, the Assistant Manager of the Referees Department and Masefield Nisbet, a referee instructor from Nevis. “A lot of work has been done and continues. Since taking over as Chair of the Referees Committee, I have been attending a number of sessions virtually. We have been doing virtual sessions twice a week—Mondays and Thursdays where Mr. Ramsey conducts training sessions for all the match officials—referees and also assistant referees…there are physical sessions on a daily basis both in St. Kitts and Nevis,” Bergan disclosed. He also revealed that a number of match officials recently passed a fitness test. “I want to give commendation to Ramsey, the Referees Department, all the officials giving of their best to ensure that our match officials reach the elite level that we expect of them,” he said.

The match co-officiated by Bassue in Texas; USA vs. Jamaica ended 2-0 in favour of the home side. Bassue is one of three Caribbean nationals among the match officials. The referee was Reon Radix of Grenada and second assistant referee Iroots Appleton is from Antigua and Barbuda.