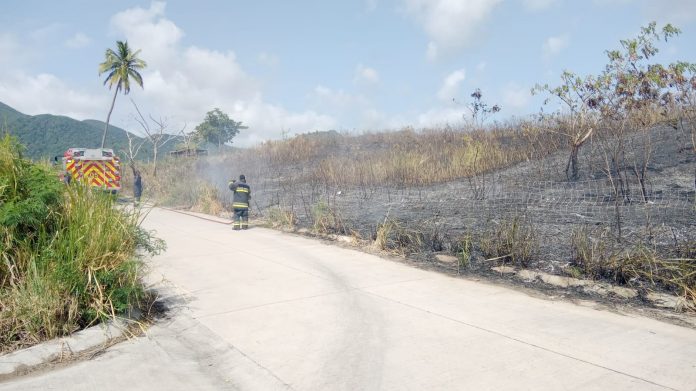 St. Kitts and Nevis (WINN): The St. Kitts-Nevis Fire and Rescue Services (SKNFRS) reports that while 2022 was “generally a quiet season” in responding to fires and other emergencies, some memorable structural fires tested their capacity and resources.

“For us at the Fire Department, I could say that we had a relatively quiet season, especially as it relates to structural fires. I believe persons are more aware and more conscious, so they are taking more precautions which contributes to that drop. We didn’t have anything significant in December, neither structural nor motor vehicle accidents. We had accidents but nothing that we needed to respond to cut persons out, and so forth. That indeed was a good December for us.”

The general data for the SKNFRS for the year 2022 shows that the Fire Services responded to 57 structural fires, 20 motor vehicle fires, five motor vehicle accidents, 285 Wildland fires, 143 other fires and 44 spurious responses or false calls.

Despite having a quiet year, in comparison to previous years, mega-fires and tragedy remain etched in the memory books of the St. Kitts-Nevis Fire and Rescue Services (SKNFRS).

“Just to highlight three of the more significant fires that [we had] and just so persons understand that fires like these there’s a lot of things that we have to take into consideration. Now these three fires [were], the school fire at the Joshua Obadia, that the school over at Molineux and there was the fire over at Christoph Habour that took us almost an entire day to extinguish, and there was that fire over at Rambury I think there were two fatalities. Those were three of the fires that would have really used quite a bit of our resources in the Fire Department. We had to pull basically trucks from all districts, even from the airport, leaving those districts open and kind of vulnerable. These are some of the decisions that we have to take.”

All other fires, which include that of lamp post fires etc., 128 were reported in St. Kitts and 15 in Nevis. There were 40 spurious responses or false calls on St.Kitts compared to four false calls on Nevis.

Meanwhile, a key observation is that the majority of requests made to the SKNFRS in 2022 were to respond to Wildland fires. Based on the data provided, these types of fires were most prevalent during the months of April to August. On average, June was the most active month for Wildfires, as per usual.

During those specific months, the Tabernacle Fire Station responded to 47 Wildland fires; 7 in April, 16 in May, 12 in June, 10 in July and 12 in August.

On the other hand, in Nevis, wildland fires were low in 2022 generally. As it relates to the period April to August, there were only three Wildland fires. Two were recorded in May and one in August. There were no wildland fires in April, June or July.

Meanwhile, in a quest to inform and educate the public on fire prevention, the St.Kitts and Nevis Fire and Rescue Services performed a variety of presentations, inspections and drills.