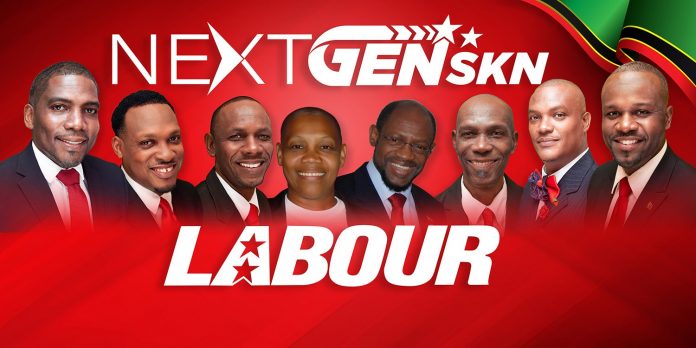 Basseterre, St. Kitts (SKNLP)- The Annual National Conference of the St. Kitts-Nevis Labour Party, held each May for more than eight decades, was postponed this year due to the severe restrictions imposed on public gatherings by both the Covid-19 pandemic as well as the State of Emergency.

Labour is pleased to announce that its 2020 Conference will now be held on Sunday, December 13th at the St Kitts Marriott Resort Ballroom.

This 88th Anniversary Conference will not include a public session. The delegates-only private session will commence at 2:00 pm and end at 7:00 pm.

The Conference will be held against the backdrop of the Covid-19 pandemic, which has impacted the lives of the people of St Kitts and Nevis.

Following the Covid-19 safety protocols, the Party felt it necessary to position itself to respond to the fiscal difficulties as reported by the IMF.

The IMF projects a steep decline in the St. Kitts-Nevis economy this year.

At negative 18.7%, the Federation is expected to be the worst-performing CARICOM member-state, underscoring the need for astute, impactful, innovative leadership to manage the projected long-term economic difficulties which may last for generations.

Labour’s December 13th Conference should be seen as the first step in the Party’s preparations to present to its membership a comprehensive Plan of Action put forward by an energized Party.

In ensuring that the Party is ready to deliver on its future national commitments, it has been engaged in a restructuring exercise over the last six months, which is in keeping with the current leadership position to transform the Party.

Delegates will consider several reports that the National Executive has commissioned.

These Reports are to include the Leadership Transition process and the Party’s Strategic Plan 2021 – 2026.

The Delegates will also be briefed on the review of the 5th June 2020 General Elections, Elections Petitions which were withdrawn, and the recent Private Criminal charges of Bribery, Treating and Cheating which were rampant in the last General Election.