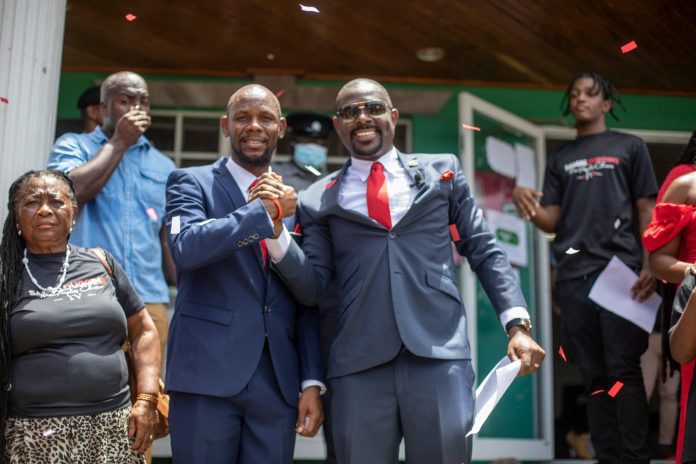 St. Kitts and Nevis (WINN): On Nomination Day (July 26) WINN spoke with St. Kitts-Nevis Labour Party Candidates Mr Samal Duggins of Constituency Number 4 and Mr Kenneth Douglas, Candidate for Constituency Number 5 who expressed confidence in their party upsetting the incumbents and regaining the mandate to lead the federation. The men shared their intentions and that of their party as they head into the upcoming National Assembly General Elections in the coming days.

Speaking to Duggins and Douglas, WINN FM News journalist Eulana Weekes asked the candidates the poignant question,  “What more can we expect from St. Kitts and Nevis Labour Party and from you as a candidate?

Duggins said “We have really been delivering our whole transformational agenda, both in terms of letting our public know what the plans are from the time we launched. We have always stood on the platform of delivering plans and policies that we try to implement going forward. Not just in rhetoric, but we have been on the ground doing the work as well. If you look over the last four to five months that we have been actively campaigning you would have seen a number of projects being executed on the ground, a number of initiatives that we would have started already because we do believe that we will be the next government; and there is no sense in waiting until after the election to start putting your elbows to the wheel and making things happen.I believe over the next few days you will see more of that, you will hear more of that and we have seen now, where the fear that existed in the public, where people were afraid of their jobs, the victimisation, because we have lived in this society where somehow the government of the day makes people afraid to express your political choice, but we are seeing now where that is shaking off and people are ready to stand up and stand out. Over the next few days, I think we will see the true impact of the labour train moving forward.

In response to the same question,  Douglas said, the Labour Party candidates will be maximising their presence on the ground, ensuring that the electorate hears the party’s message.

Duggins and Douglas also replied to the points of view of regional pollsters who didn’t give the former ruling party much chance of claiming the election victory.

“We would have seen comments about plans of hijacking the election, we would have heard a number of pollsters give their comments. Starting with the comments of the pollsters I find their rhetoric very creative, the party is building momentum. Now if you are at the back of the race, any movement forward is momentum but not one time did the pollster ever say they are projected to win. They have momentum but they are not projected to win, so I guess they are fighting to see who is second and last and that’s fine but we already know who is number one, and I am happy for that.”

Douglas said the party remains focused on the task ahead.