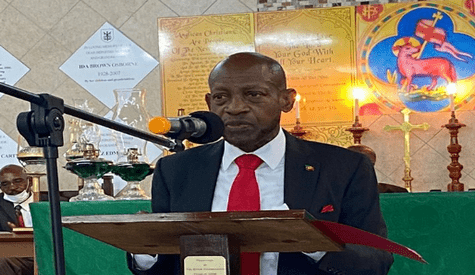 St Kitts and Nevis (WINN): Leader of the St. Kitts-Nevis Labour Party (SKNLP) Dr. Denzel Douglas is assuring supporters that his party is standing with them for what he called “justice and democracy”.

Those comments come against the backdrop of the party recording a sound thrashing at the June 5 general elections, which saw them only winning two of the eight seats on offer.

Speaking at a special Thanksgiving Ceremony Sunday (July 5), Dr. Douglas said the SKNLP will fight for the people.

“…Let us work together bravely and audaciously to address the persistent injustices and inequalities in our country. Our time in opposition is but a voyage of self-discovery, let us use the time wisely to continue the work of sharpening ourselves as a party, as a movement, and as a grassroots organization.”

The former Prime Minister disclosed that the party is working on its transition and developmental plans.

“Together we shall work on our transitions, we shall continue to work on our succession plans, transformation, and the party’s development will be for the good that we can do for all Kittitians and Nevisians at home and those who are abroad as well.”

The SKNLP leader says that his party’s six election petitions currently before the court.

Dr. Douglas also promised that the SKNLP will continue to hold the government accountable for its good governance agenda.