SKNLP Leader says PAP will not end but tweaked 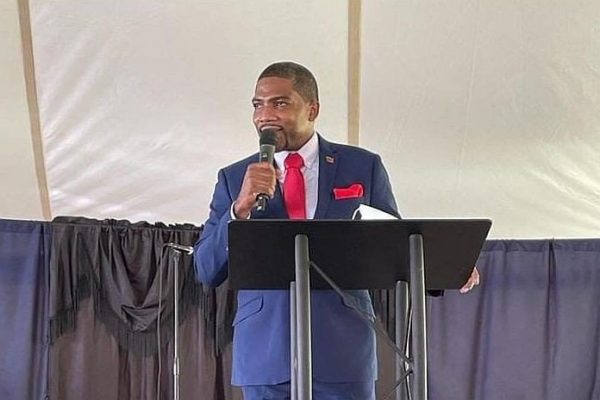 St. Kitts and Nevis (WINN): The Poverty Alleviation Program (PAP) is one of the points of contention in this campaign season, especially between two candidates vying for control over Constituency No. 8.

Andrew “Talbo” Bass, the Peoples Labour Party (PLP) candidate, suggested during the launch of his Vision Centre in No. 8 that the PAP program is under threat.

“My local plan will deliver this so we can build on the progress we have already made under the Peoples Labour Party, so don’t put it at risk. A vote for Labour here is a vote to scrap PAP,” Bass made those remarks on July 3, 2022.

However, the Political leader of the St. Kitts Nevis Labour Party, Dr. Terrance Drew, explained that if his party wins the majority in the upcoming election will not end the financial support program but will augment it.

“I want to say to the people of St. Kitts and Nevis that the St. Kitts Nevis Labour Party will not end the intention of what the PAP is; that is not going to happen. We had a program called the MEND, and we are going to challenge the PLP who have suggested that we want to end PAP. Tell them that we started the PAP, but we didn’t call it a poverty program; we called it MEND, and now we are saying that we are going to MEND the PAP. And out there, we said that people did not even know because we did not bring people into the square and say that these are people living in poverty and display them before the world. We found who these people were, and we had the schools submitting the names [of people] that we could have gone to and [their situation would be evaluated].”

Dr. Drew continued, “What would be required to lift this particular family out of poverty? Would this family require $500, $1,000, $1,500? And how we set it up, once we make the calculation, you would get the necessary funding that you need to lift you out of poverty. But we just did not give you the funding alone.”

According to the SKNLP, there was a 67 percent improvement in the quality of life and material well-being of people in St. Kitts and Nevis by providing them with assistance and opportunity between 1995 and 2015 according to the Human Development Index Country Report.

Dr. Drew explained how such opportunities would be presented to people on the program to provide them with a pathway out of poverty instead of relying on the program indefinitely.

“And also if we find that the mother has a particular type of skill, she can sew [or] she can cook well, what we would do is to help her or create a micro-business, give her the funding so she can do a micro-business. So if she likes to bake, why not give her a stove, a good oven, with that big pans, the necessary ingredients and she can bake, and she can sell her cakes. Easy like that, she can be bringing in $1,000 per month doing that [making] a few hundred dollars per month that she did not have that can add to the household. Right there, she becomes industrious, and that builds esteem, and that creates wealth for the family so that she can build.”

He added, “We look for opportunities where you can invest in that family so that that family can start creating its own wealth. But added to that we want to make sure that the children [of the family] go to school and the children need laptops… they need internet… anything that we can give that family, that would give the children and the mothers an opportunity to be lifted out of poverty. So we’ll help them to live above the poverty line and create opportunities for them so that one day they will be in a position to continue on and would not need the assistance of the government for all of their lives,” said Dr Drew in an interview with EK Flanders on the July 5 broadcast of his show Let’s Get Real.

The PAP is a social assistance programme introduced by the Ministry of Sustainable Development in December 2018. It aims to assist the poor, the needy and the most vulnerable households in St. Kitts and Nevis. Families earning under $3,000 per month could apply and receive consideration of a $500 monthly stipend.