St. Kitts and Nevis (WINN): During the April 26 broadcast of WINN’s Island Tea, the Right Excellent Dr. Denzil Douglas, former leader of the St. Kitts Nevis Labour Party, said he could not say definitely whether or not the Labour Party would welcome Prime Minister the Hon. Dr. Timothy Harris back into the Labour Party.

“I am not the leader of the party, and I support my leader. But, of course, a decision of this kind would have to be discussed at great length… I am not aware that the party has taken a formal position on this,” said Dr. Douglas.

He added that as the oldest political party in the Federation and the Eastern Caribbean, that adaptability is necessary.

“The party, therefore, must be very conscious of the changes that are being made in the electorate in terms of their thinking and also in the country and the participation of people in our democratic process. So, I am not going to say that the party cannot and will not. I did it myself back in 2010… I reached across to Nevis, and I invited Patrice Nisbett… invited him to become the Attorney-General and eventually, he also became the Foreign Minister, etc. But at that time, the St. Kitts Nevis Labour Party formed the Government on its own; we had six seats.”

The new leader of the 90-year-old party, Dr. Terrance Drew, said in a Facebook post that while the good people of the Peoples Labour Party are welcomed home, under his leadership, the SKNLP will not join hands with the Leader of the PLP, Prime Minister the Hon. Dr. Timothy Harris. 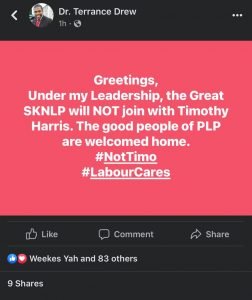 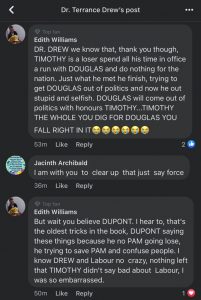 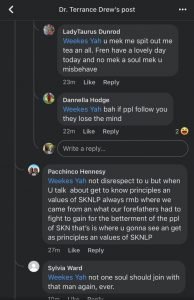 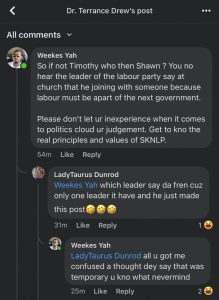 WINN made attempts to get a comment from Dr. Drew on the Facebook post and his reaction on the Motion of No Confidence, the mini-manifesto laid out and the statement that Dr. Harris would not be Prime Minister again but was unsuccessful at the time of writing.