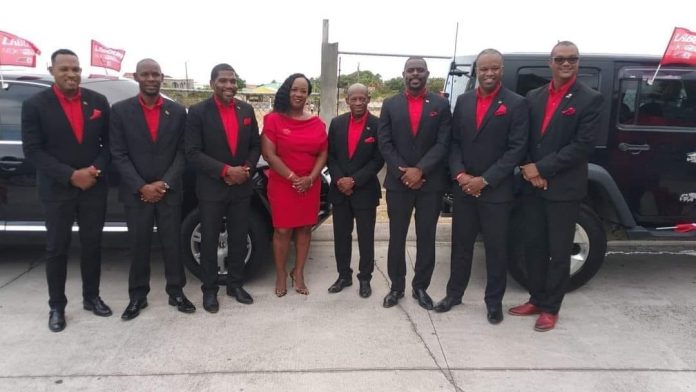 On St. Kitts, the St. Kitts Nevis Labour Party (SKNLP) has the lead, and on Nevis, the Concerned Citizens Movement has won all three federal seats on Nevis. At the time of writing, 11 candidates emerged as the clear winners in their perspective Constituencies.

Geoffrey Hanley, the SKNLP Candidate for No 1, returned a win in his constituency with 2,709 votes of  3,499; registered voters, 6,366. Hanley was up against newcomers Natasha Grey-Brookes for the People’s Action Movement and Jacqueline Bryan of the Peoples Labour Party. Voter turnout was 54.96 percent.

First-timer Marsha Henderson, the SKNLP candidate for constituency No 2, won the seat over fellow PLP newcomer Nubian Greaux and the incumbent, PAM’s Jonel Powell. Henderson won with 1,841 out of 3,316 valid votes; 5,735 people were registered in No 2, and the voter turnout was 57.82 percent.

St. Kitts Nevis Labour Party’s Konris Maynard won with 1,747 votes out of a 62.95 percent turnout in that constituency. Valid votes were 2,788 out of 4,429 registered voters.

People’s Action Movement Leader Shawn Richards returned as the winner in Constituency No 5 with 2,105 votes out of 3,223 registered voters, a 65.31 percent voter turnout.

In Constituency No 6, Dr Denzil Douglas, former leader of the SKNLP, was announced as the victor in his constituency, winning with 1,926 out of 2,339 valid votes; 3,467 individuals were registered to vote in that area; 67.46 percent of voters turned out to vote.

SKNLP party leader Dr Terrance Drew finished the list of winners on St. Kitts. Dr Drew attained 2,950 votes out of 4,632 valid votes. Total registered voters were 7,370, and the turnout for No 8 was 62.85 percent.

Brantley won with 1,685 votes from the 3,074 citizens and residents who cast their ballots from a constituency that has 6,669 voters registered; a 46.09 percent voter turnout.

In Nevis 11, Alexis Jeffers won by a small margin over Nevis Reformation Party Leader Dr Janice Daniel Hodge, with a vote of 1,172 to her 1,113 votes. The total registered voters in that constituency, 4,294 and 2,317, were validly cast, a 53.95 percent voter turnout.

The total turnout for the 2022 General Elections was 58.15 percent, which is similar to 2020’s voter turnout of 58.31 percent despite the lack of restriction on overseas voters but significantly lower than 72.19 percent in 2015.

Based on how the results have taken shape, the St. Kitts Nevis Labour Party would make up the Government. The new unity construct featuring the People’s Action Movement and the Concerned Citizen’s Movement should form the opposition.

Following the conclusion of the election count, Dr Drew is expected to be sworn in as the new Prime Minister of St. Kitts and Nevis. Portfolios for Ministers should follow at the official swearing-in ceremony of the new government ministers.