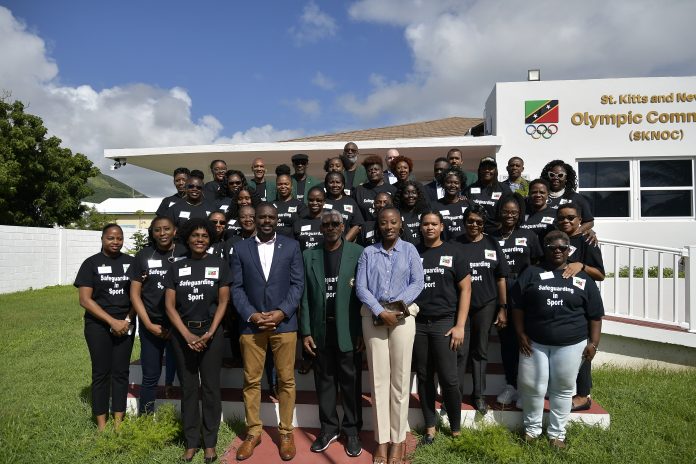 What was the occasion? The hosting of the SKNOC’s Women in Sport Commission’s (WSC)
Project – “Safeguarding in Sport” seminar.

The “Safeguarding in Sport” Project is the invigorated thrust now being framed by the
international sport leadership (including the International Olympic Committee, the
Commonwealth Games Federation, and International Sport Federations), in conjunction with the United Nations via its convention on the ‘Right of the child to be able to participate in sport in a safe environment’. This was designed to make all relevant stakeholders aware and cognizant of, and willing to adopt the body of principles which shall henceforth instruct the mode and tone of conduct and behaviour of all levels of influencers in sport vis-a-vis their relations and interactions with athletes, relevant to abuse (physical, mental, sexual, gender equity, etc.,).

The hosting of the Safeguarding Seminar was, according to Ms. Jennifer Nero, Chair of the
SKNOC’s Women In Sports (WIS) Commission, an illustration of the seriousness that the
SKNOC leadership attaches to a feature which would undoubtedly “assume increasing
significance in the assessment of sport organizations’ stewardship going forward”.

The interactive nature of the seminar was designed and produced by the St. Kitts and Nevis
native, Mr. Lenny Lake, a former national footballer (soccer) and cricketer who now serves as FIFA’s Training Facilitator/Consultant. Mr. Lake who functioned as the seminar facilitator and skilfully transformed the space into a genuine ‘WORKshop’ environment, had reason to comment favourably and very positively about the “enthusiastic engagement” of the twenty-nine (29) female participants selected by their respective Member Federations of the SKNOC and who serve on the Executive/Management of their sporting bodies.

The seminar which commenced at 9:00am on Saturday, November 12th and ended some 5 hours hence, was graced by the presence of the Honourable Minister with responsibility for Sports et al., Mr. Samal Duggins, who delivered inspiring remarks, and was accompanied by his wife, Mrs. Duggins, who was most enthusiastically welcomed to an environment where she is no stranger.

Also present, at the occasion, were the Acting SKNOC President, Mr. Dennis Knight, who, in his remarks spoke to the SKNOC’s leadership support; Mr. Glenn Quinlan, in his capacity as Chair, of the National Sports Council. Several other members of the SKNOC Executive were on hand displaying the undoubted encouragement that the leadership attaches to the educational, proactive initiative.

There was tremendous credit associated with the outcomes of the group exercises in which the participants engaged in their collaborative search for responses for and solutions to perceived and actual challenges posed by Safeguarding in Sports. The participants used a variety of means, including jingles, and role plays to arrive at recommendations for actionable steps to take back to their parent organizations.

It was revealing to learn from the participants what their individual experiences were like:
“….. Great session. A wealth of information and very engaging. Things that I took for granted as an athlete is now an offense but that’s what we call ‘good change”, commented one participant.