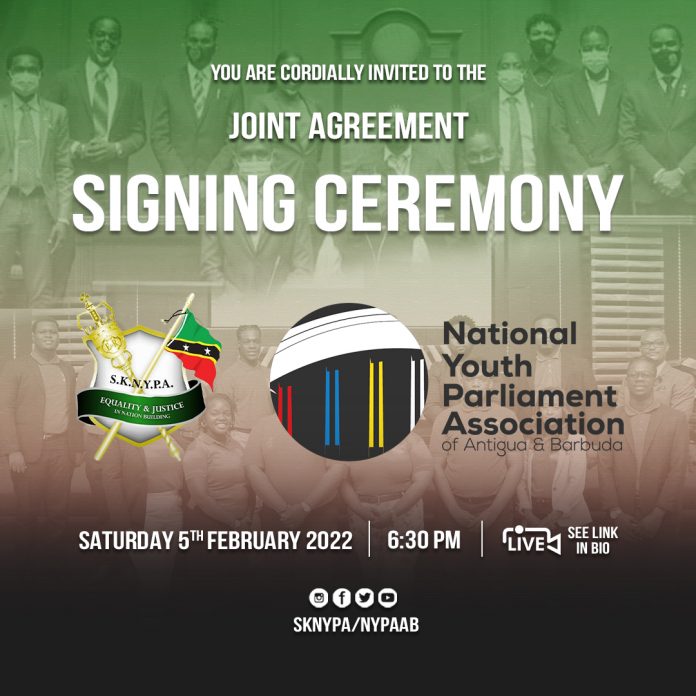 The signing of the joint agreement will seek to establish, among other things, a committee to govern the affairs of and give guidance to the agenda of the SKNYPA and the NYPAAB, joint debates along with any other agency that may be added to the agreement, and standing orders to state the rules and regulations that govern the conduct of parliamentary debates within the Parliament of Antigua and Barbuda and the National Assembly of St. Kitts and Nevis.

SKNYPA and the NYPAAB signed an agreement of mutual cooperation in December 2019 which supports the political, developmental and ideological positions that either entity may adopt once it is in the interest of the betterment of young people in the respective countries, the OECS Region or the world at large.

The joint agreement will be signed by President of SKNYA, Mr. Mauriel Knight and President of NYPAAB, Mr. Kamalie Mannix. The ceremony will begin at 6:30 p.m. and will be streamed live on the Facebook pages of both associations.

The National Youth Parliament Association of Antigua and Barbuda was established on October 25, 2019 with the aim to provide young people with a platform to advocate on youth and national issues while fostering public speaking, legislative drafting, parliamentary debate and civic engagement.

The St. Kitts National Youth Parliament Association is a non-profit, non-governmental, non-partisan youth organization in St. Kitts which is geared towards being the voice for youth in the federation of St. Kitts and Nevis. SKNYPA was launched on September 13, 2001, under the motto “Equality and Justice in Nation Building.”