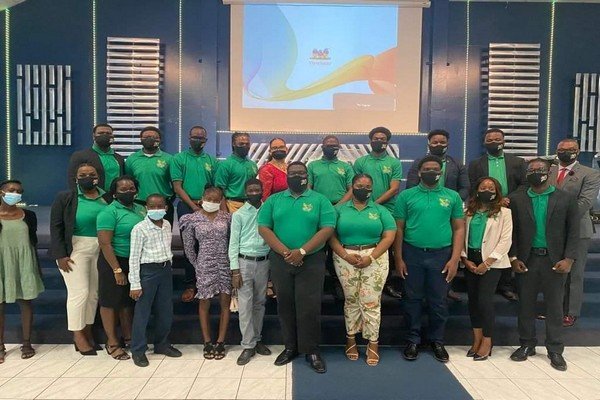 PRESS RELEASE — Distribution of food baskets and a church service followed by a wreath-laying ceremony at the Springfield Cemetery gravesite of the late Desmond Eli Ward, a founding father of the St. Kitts National Youth Parliament Association (SKNYPA), were activities carried out over the weekend by the association on the occasion of its 20th anniversary.

On Saturday, September 11, in commemoration of International Day of Charity which falls on September 05 each year, members of SKNYPA journeyed to the McKnight and Market Street communities in Basseterre to distribute food baskets to four elderly people in those communities.

The recipients were all pleasantly surprised by the initiative especially amidst the COVID-19 pandemic and expressed their deepest appreciation for the kind gesture.

Activities for the celebration of SKNYPA’s 20th anniversary continued on Sunday, September 12, when members worshiped at the Rivers of Living Water Christian Centre in Lime Kiln, Basseterre at 9 a.m.

President of SKNYPA Ms. Patrice Harris in giving brief remarks at the worship service highlighted the unique abilities of the SKNYPArians, and the hard work and contribution they make to society.

“The young people that you see adorned in green today [Sep. 12] are not any spectacular young people or extraordinary in any way. They have just stepped up to the mantle of ensuring that they work towards making St. Kitts and Nevis a better place,” Ms. Harris said.

“Most of the youth parliamentarians that you see here today are high schoolers, college students, they have professions, they have small businesses, and they really have taken the notion to a next degree that the easiest thing you can do in your life is nothing, and they have recognised the importance of giving back to the community,” she continued.

Also in attendance at the worship service were the Hon. Dr. Geoffrey Hanley, also a founding father of SKNYPA and the recipient of the Ward-Hanley Scholarship and Mentorship Programme.

Immediately following the worship service, members of SKNYPA journeyed to the Springfield Cemetery to pay tribute to one of its founding fathers the late Desmond Eli Ward, a former parliamentary coordinator at the National Assembly of St. Kitts and Nevis. The Hon. Dr. Geoffrey Hanley, also a founding father of the association, and who was present at the ceremony, shared fond memories of Mr. Ward and expressed how proud he would have been to see how far SKNYPA has reached today.