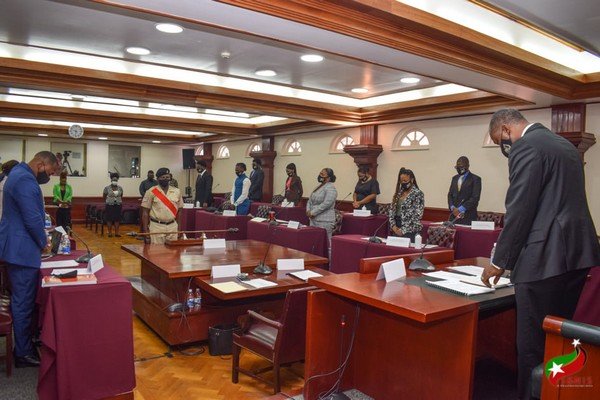 PRESS RELEASE — Past and present members of the St. Kitts National Youth Parliament Association (SKNYPA) filled the seats of St. Kitts and Nevis’ National Assembly Chambers on Monday, September 13, 2021, exactly 20 years from when SKNYPA was officially launched in 2001.

Presided over by Mr. Konris Maynard, former Member of Parliament for St. Christopher 3 and alumnus of SKNYPA, the debate was opened by President of SKNYPA, Ms. Patrice Harris who acted as the Honourable Prime Minister and Minister of Finance, Education, Commercial Enterprise, Consumer Affairs, Business Development, Foreign Direct Investment and Investment.

The resolution seeks create a market where micro, small and medium businesses are sustained and expanded through the elimination of incorporation fees for small businesses and the establishment of low-interest loan facilities, and to improve the nation’s policy and regulatory frameworks for businesses within the federation through the reformation of the Labour Laws and the enhancement of debt collection in times of business insolvency and bankruptcy.

In support of the resolution, Ms. Harris said her government recognises the heightened need to intensify their efforts to create a favourable environment for businesses to thrive. She said “the government recognises the importance of the private sector to our overall economic growth” adding that “the government understands the ripple effect that sustained investment and creation of favourable market conditions can have on the average citizen.”

In the World Bank’s 2020 Doing Business Report, St. Kitts and Nevis ranked 139 out of 190 countries worldwide.

Mr. Gumbs said the problem lies in the timing of the resolution. “It would have been better for the government to bring a resolution that focuses solely on local small businesses’ assistance and growth as these businesses have been severely affected by the pandemic.”

Ms. Bradley said the resolution sets St. Kitts and Nevis on a course to be a lighthouse of inspiration and guidance for our fellow Caribbean countries. “Countries like Barbados and St. Lucia have both made strides to develop their blue economy. Together, we can ensure a sustainable future for all of CARICOM,” Ms. Bradley said.

Ms. Isalean Phillip, an Advocacy and Research Officer with a Public Health NGO acted as Leader of the Opposition and Member for St. Christopher 8. The Opposition Leader in her presentation chastised the government for “poor management of fisheries and marine resources”.

“Is the government really ready to ensure that we can enforce legal protections [in fisheries and marine resources]? Because again, that requires collaboration and partnerships so when we have persons who are poaching and practicing unsustainable fishing practices or who might be destroying fish traps of our fisherfolk, when they call the Department of Marine Resources and report these things and the department have to call the coast guard, the coast guards are saying ‘that is not a priority for us because we are busy defending our national security’ so they don’t have the resources to ensure that they can enforce the legal consequences and prohibitions.”

Deputy Prime of St. Kitts and Nevis, the Hon. Shawn Richards, Leader of the Opposition, the Rt. Hon. Dr. Denzil Douglas, the Hon. Dr. Geoffrey Hanley, Member of Parliament for St. Christopher 1 and founding father of SKNYPA, former Deputy Prime Minister, Mr. Sam Condor, as well as former and current SKNYPA members, other dignitaries and parliamentarians, parents and well-wishers occupied the seats in the gallery in support of the youth parliamentarians.