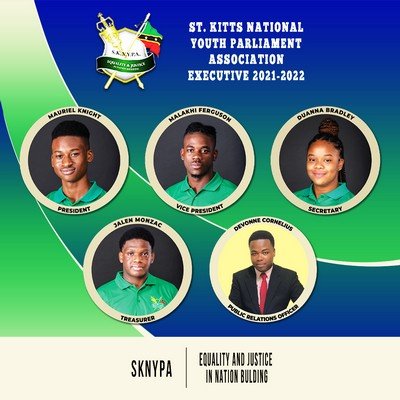 The AGM was held under the theme “20 Years of Shaping Our Society: Forging Ahead with Justice and Equality”.

Mr. Mauriel Knight, who served as Vice President for the 2020-2021 SKNYPA year, expressed his appreciation to those that supported him and urged members to work together to further carry out the work of the young people.

He said “the dedication that each one of us have invested into SKNYPA is what has made us the robust, representative and unshakable association that we are today. I wish to thank all of you for the confidence that you have placed in me to lead you for the next 12 months.”

Mr. Knight further stated that “…this confidence is not something that I wish to take for granted and I pledge to you all in my commitment to serve with integrity, respect and fairness. I assure you that the challenges that lie ahead are enumerable but together we can work to solve them and ensure that we can continue the work that has, for the past two decades, been a remarkable success.”

Outgoing President Ms. Patrice Harris presented the end of year report and told her fellow SKNYPA members that they have been bestowed with the power to be the voice of young people.

Ms. Harris said “as I conclude my presidency and my tenure in SKNYPA, I wish to leave you with these words: Never underestimate the power of a group of people who desire to make the world a better place. You are gifted, special and talented. You have been bestowed with the power to be the voice of the young people and under no circumstance should you take your role for granted. The work that we do at SKNYPA is rewarding, it is endless, it is altruistic, but most importantly it serves our nation.”

Featured Speaker the Hon. Dr. Joyelle Clarke encouraged the members of SKNYPA to “speak up to recreate a society where we do not normalize gun violence nor reward it. We need a society where educated individuals have equal rights to employment regardless of political association, or sexual preferences,” she said, adding that “we need not be subjected to the indignities as suggested in Singing Sandra’s song nor the subtle questions posed by government and employers: whey you from/ who is your mother, you vaccinated? Who you vote for? Make your voice loud in protest of such discriminatory actions.”

The 20th Annual General Meeting which concluded the calendar of events for SKNYPA’s 20th-anniversary celebrations took place at the CUNA Caribbean Conference Center at the Caribbean Confederation of Credit Unions Headquarters. Among those in attendance were past presidents Ms. Azilla Clarke and Mr. Azard Gumbs.