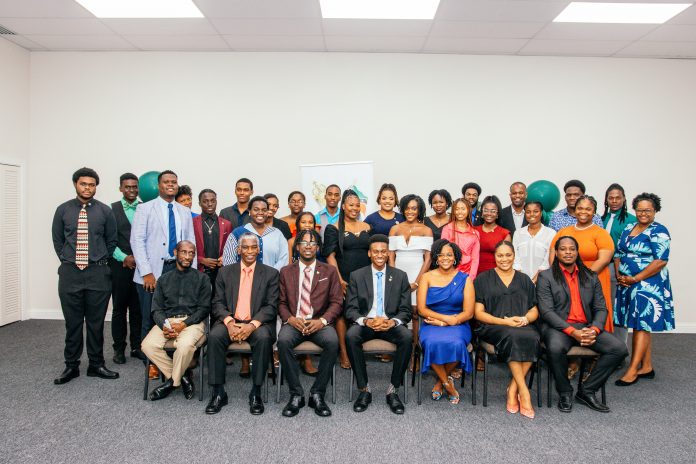 The 2022 cohort of SKNYPArians comprising 13 Kittitians and four Nevisians were officially inducted at an Induction Ceremony held Sunday, July 17 at the CUNA Conference Centre.

During the probationary period, the newly inducted SKNYPArians were exposed to training in areas such as public speaking, project proposal writing, research tips, and Robert’s Rules of Order as well as mock parliament sittings and community initiatives. A number of awards were presented to some of the new inductees based on their performance during the probationary period.

The award for Most Initiative Shown went to Mr. Kynique Lyjfrock with Ms. Trosonya Douglas as runner-up. Most Improved Probationer was Ms. Zahra Browne and the runner-up went to Ms. Jahzara Andrew. Ms. Andrew also secured runner-up for the Volunteer Committee Hearts and Hands Award for Most Voluntary Probationer.

Featured Speaker Ms. Patrice Harris, former SKNYPA President, used the opportunity to welcome the new inductees into the Association. She said, “I wish to welcome all of the newest members into SKNYPA with warm hands. I take this opportunity to remind them of the core principles of leadership including empathy, compassion, integrity, advocacy and legacy. May you not walk away from this Association as the same person who joined.”

Chairman of the Selections Committee Mr. Malakhi Ferguson, who also serves as SKNYPA’s Vice President, congratulated the new inductees and recognised them for their commitment and proactive behaviour throughout the probationary period.

“To the 2022 cohort of SKNYPArians, I want you to wear your SKNYPA badges with honour and pride. SKNYPA is truly an association that is bigger than ourselves. We are a group not driven by personal advancement but driven by the love for country. I want you even after you leave here to ponder on a very instrumental theme: Equality and Justice: A Legacy Worth Pursuing,” Mr. Ferguson said.

Also delivering remarks was President of SKNYPA, Mr. Mauriel Knight. He said, “I am pleased that you have accepted the call to serve and have joined this body of the nation’s youth advocates. As the enabling voice for youth in our Federation, the task now lies on you to ensure that the voiceless are heard and that the unenlightened are edified.”

The Induction Ceremony of the 2022 Cohort of SKNYPArians was attended by founding father Hon. Dr. Geoffrey Hanley; Ms. Valencia Syder, Permanent Secretary in the Ministry of Youth Empowerment; and Mr. Pierre Liburd, Director of Youth Empowerment. Honourary members, alumni, family and friends of the new inductees, and other specially invited guests were also present.