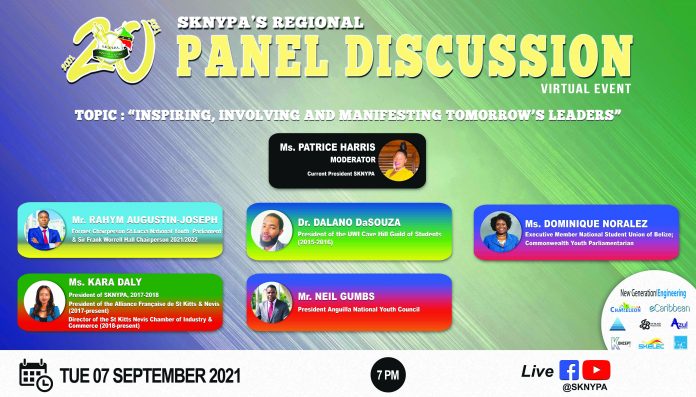 PRESS RELEASE (September 09, 2021) — Youth leaders from across the Caribbean region concur that an enabling environment is needed for young people across the region to grow and participate in decision-making among other things.

Speaking at a regional panel discussion on the topic “Inspiring, Involving and Manifesting Tomorrow’s Leaders,” Caribbean Policy Analyst, Dr. Dalano DaSouza stressed that today’s leaders should be focused on creating the right atmosphere for young people to participate and engage themselves in politics without fear of victimization and backlash.

“We have to change the political landscape that we have today. Our current leaders have a big role to play in that. Political tribalism seems to be dividing us as a people and that fear in terms of speaking out that is something that is very pervasive and until the young people who can speak confidently without fear of things like victimization, losing a scholarship, fear of being lambasted by political parties, I think it is going to be difficult to get the right sort of people in leadership,” Dr. DaSouza said.

Mr. Rahym Augustin-Joseph, former chairperson of the St. Lucia National Youth Parliament, while on the panel lobbied for educational advancement and aligning the education system with the needs of the workforce.

“There is a direct mismatch between what young people are learning and what the future of work requires. There needs to be more robust funding for education,” Mr. Augustin-Joseph said.

“What is really going to be important, and indicative of to the extent where we are able to inspire and build our youth leaders, is the way in which we reform our education system and what I mean by that is ensuring the education system is in direct correlation to what the future of work looks like,” he continued.

The panel discussion organised by the St. Kitts National Youth Parliament Association (SKNYPA) on the occasion of its 20th-anniversary celebrations also saw participation from its former president Ms. Kara Daly who called for more mentorship and life skills programs for young people to advance in their personal and professional life.

“Many times, students were taught that they have to study all these subjects, get a job and then go to university. But there wasn’t any learning of life skills,” Ms. Daly said, adding that she “was part of Diamonds in the Rough Mentoring Programme. It is no longer up and running but its main goal was to achieve just that. We should fund and create more mentorship programs like that.”

Mr. Neil Gumbs who currently serves as the president of the Anguilla National Youth Council expressed that he was delighted to have been afforded the opportunity to be part of the decision-making process on his island.

Ms. Dominique Noralez, Executive Member of the National Student Union of Belize, and one of the panelists spoke to the vulnerability of Caribbean economies and the need for diversification.

“We are living in an environment that is highly dependent on tourism and highly debt-saturated. I think for us in the Caribbean, one of the things we have to realize is that the future is in the cloud and when I say that I mean technology. We must be able to export more than our natural resources and depend less on the exportation of our resources and land and our people in the area of tourism.”