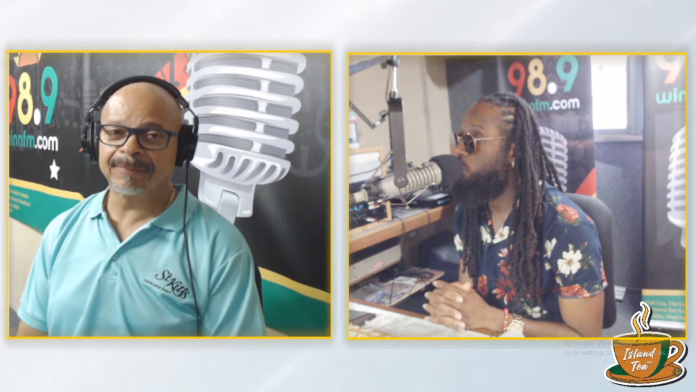 St. Kitts and Nevis (WINN) – Travel is on the rebound, and slowly visitor confidence is returning, according to the CEO of the St. Kitts Tourism Authority, Ellison “Tommy” Thompson.

“We’re actually at a very positive first quarter. If we looked at stay-over visitors in January, we cleared 6,591 [vistors], that was also when we had the Omicron variant, so that kind of reflected in our February numbers which were slightly down, with 6,353. But March was really good, and we had 7,676 stop-over visitors. So we actually ended the first quarter on a very positive note, and that is extremely encouraging for us,” Thompson made those remarks during an interview on WINN’s Island Tea with host Azem Bailey.

The positive trends continue for summer and fall airlift.

“The summer airlift schedule is much better than it was last year. This year we’ve got daily service from Miami, and then on Saturday, it’s doubled daily. And last year, we just had three flights. We’re also happy that the Charlotte flight from American [which] ended on April 2, but it’s coming back on June 4 until August 13. Delta is extending their series of flights, so it’s weekly until [September 3]. We’ve got British Airways twice weekly from London, Gatwick, and that’s on a Wednesday and a Saturday. And, of course, we’ve got LIAT from Antigua, St. Maarten, Barbados, Seabourne from San Juan and WinAir from St. Maarten. And a very positive note for the fall, we just had a conversation this week with Air Canada, and they are going to bring back their service from Toronto to St. Kitts starting in the fall. So that is great news for us.”

Thompson indicated that once the Federation continues the current trend of declining COVID-19 cases, the destination will be looking at the possibility of a further easing of restrictions, especially for unvaccinated tourism stakeholders.

“Persons who were unvaccinated, they will soon be allowed to come back to work. So they do have to go through the travel approval training program. And I think that’s a very positive step forward as well.”

The SKTA remains cautiously optimistic about the future of stay-over visitors as the period for peak winter travel comes to a close.

During the summer season, the SKTA CEO reminded the tourism stakeholders to manage expectations and use this time to prepare for the 2022 winter season.

On the cruise sector, Thompson shared that there have been no cancellations due to COVID-19 but due to weather conditions.

In April, the SKTA anticipates 35 calls, which according to the CEO, is in line with the usual trend for SKN as seen in April 2019 when the Federation welcomed 33 calls; in April 2020, the tourism officials projected 29 calls to our ports.

“Unfortunately, between May and September, we’re [going to] have 14 calls by ships. One of the issues was that a lot of the home-porting that was done out of Puerto Rico is not happening. We used to get a lot of those ships that were home-porting and beginning the cruises out of Puerto Rico. Also, the Carnival Fascination [which] has been taken out of commission, was one of the ships that came in every Friday. So we’ve seen that Royal Caribbean is probably going to be the premier deliverer of visitors for the summer months. So between May and September, we’ve got to manage our expectations because the calls are not going to be as robust as we wanted.”

Thompson assured that the authority has been in constant discussions with cruise line partners, citing their continued support of the destination as a crucial part of sustaining the sector.

The SKTA is also scheduled to attend Sea Trade Global from April 25-29 at the Miami Beach Convention Center to further engage with the global cruise sector.

“Part of the discussion is what’s happening in the fall, but also to see if we can get any additional ships for this summer. It’s kind of difficult for the summer because the cruise lines have already set their schedules and have already positioned their ships where they need to be. You might get the odd one or two, but like I said, we have to be prepared that it’s not going to be a sunny day all summer long.”

The CEO emphasised that there is no anticipation for the cruise summer arrivals to be the same as during the peak winter season. The reason lies in the availability of Alaska and the European region being warmer during this time and generally a more attractive option for our main source markets (The US, UK and Canada).

“The ships get repositioned to Alaska and Europe. So that’s where the issue is, and you also see that some of the cruise lines are also still experiencing crew shortages, so that’s kind of been an issue, and they’re also making adjustments to their fleets. So you know, let’s just hope that the new variants of COVID-19 are not a further impediment to business [for] us in the summer.”

With the slowing of tourist arrivals expected in the summer, the CEO said that the summer events, including the St. Kitts Music Festival, should drive some arrivals to the destination and said the SKTA is working on creating additional summer events.

“We also have some events that the SKTA is planning as well. So we are looking to see how we can create events in [the] destination that’s going to give our entrepreneurs an opportunity to make some additional money. We also want them to take the time to sharpen their skills and take advantage of the summer training programs that we’re going to be having. The vaccinated and the unvaccinated who are going to be able to work together, the training is going to be critical to make sure that we’ve got the safety protocols down packed and we know how to protect ourselves and also the guests coming in, there’s also going to be a new decal that’s coming out, there will be further information on that as well.”

The SKTA continues its consultations with local stakeholders to gain feedback from the people working within the sector.

Over the next few months, several activities aimed at forging better relationships among local stakeholders and partners will be held to share ideas and create more significant opportunities in the marketing efforts and improve the destination’s image in the marketplace.

The first round of consultations has already begun and included hoteliers, taxi presidents, the taxi fraternity and vendors.

The CEO reminded all Travel Approved taxi operators of the gas subsidy who have not already applied to complete the forms at the Ministry of Finance. The support spans three months with EC$400 per month.

Additionally, the Center for Disease Control and Prevention (CDC) in the US earlier this week lowered the travel advisory for St. Kitts and Nevis to Level One, signifying a low level of COVID-19 transmission in St. Kitt and Nevis.