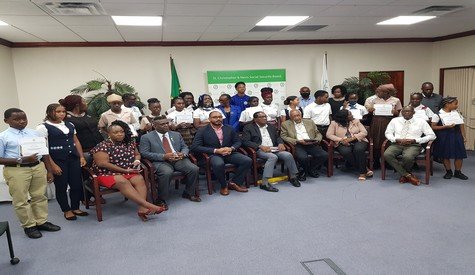 St Kitts and Nevis (WINN) — The St. Christopher and Nevis Social Security Board awarded 21 students across the federation with the “Susanna Lee High School Scholarship” for their continued excellent academic work, at an induction ceremony at their boardroom on Tuesday, October 27, 2020.

Director of the St. Christopher and Nevis Social Security Board, Mr. Antonio Maynard, and Mr. Ernest Pistana, Chairman of the Board, presented the certificates to the awardees which were followed by the Signing of Commitment Agreement by the parents and students.

The induction ceremony which was held under the theme “Never give up” saw the Featured Address being delivered by Scholarship Alumni and now Principal of the Verchilds High School, Mr. Miguel Thomas.

In his address, he said, “There were times when I got tired, there were times when I wanted to give up, but whatever the goal is, the goal is at the end of your road you need to stick to it. Everybody’s path is not the same. But the end goal that you want to see, you can achieve that end goal. You might struggle, you might cry, you will stumble at times but you are never in a position to give up”.

Minister of Social Security, the Hon. Eugene Hamilton, in his remarks to the attendees, said “Scholarships have come to be appreciated the world over as one of the ways to fill the void facing many individuals as they seek to maximize on opportunities for education. In the case of our Social Security program, it was a very pioneering vision way back in 1983. Minister Hamilton further added that “This vision inspired the Social Security Board to present an Independence gift to the new federation of St. Kitts and Nevis, one that would not only be of direct assistance to students and parents of deserving scholars, who may not without this type of assistance realize their fullest potential, but would also propel our nation into uncharted educational spaces”.

At the ceremony, remarks were made by Ms. Jenifer Williams, Chairperson of the Scholarship Committee who admonished the recipients to always strive to be successful. The program was also packed with expressions of appreciation and a poem by some recipients.

Also in attendance were Minister of Education, the Hon. Jonel Powell and other senior education officials as well as the staff of the Social Security Board, parents, and guardians.