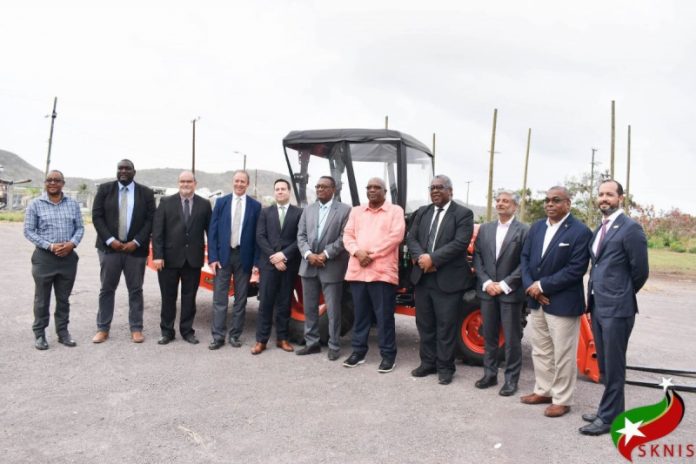 St. Kitts and Nevis (WINN) – The SOLEC Power Ltd/Leclanche/SKELEC Solar and Battery Storage Farm had a Kick-Off Ceremony for the farm’s construction on June 15.

SKELEC hosted the kick-off at Wellington Road Basseterre at 4:30 p.m., in another step in the gradual transition to renewable energy for the Federation.

Daryl Lloyd, Permanent Secretary in the Ministry of Public Infrastructure, Urban Development and Post, said the farm would be the largest solar farm in the Caribbean region to produce 35 megawatts of energy.

The General Manager of St. Kitts Electricity Company (SKELEC), Clement Jomo Williams, spoke of the impact this solar farm will have on the Nation’s energy sector.

“This solar generation project will provide between 30-35 percent of St. Kitts’ energy for the next 20 to 25 years while reducing Carbon Dioxide emissions by over 700,000 metric tons over that same period. St. Kitts stands to be a model for the other islands worldwide in renewable energy.”

With the storage capability and capacity of the farm through batteries, residents who will be using energy from the farm will be able to do so during the nights and peak hours without interruption, which will be fully integrated into the already existing infrastructure of SKELEC according to Bryan Urban a representative from SOLEC Power Ltd.

The farm’s operations are expected to begin as early as next year, according to Martin Vogt of MPC Energy Solutions from Germany, who spoke about the importance of the transition to renewable energy, especially during the current global climate.

“According to climate analytics, one megawatt of solar energy replacing oil-based energy saves the utility about US$150,000 every year across the lifetime of the solar farm. Well, then you can estimate how much savings SKELEC will generate during the lifetime of this landmark project. And especially in times like now, with significant geopolitical uncertainties, high volatility in oil and gas prices and fuel supply disruptions, the introduction of renewable energy is not only a way to reduce CO2 emissions, but it’s equally to sustain economic and social development, energy security and eventual political stability.”

Deputy Prime Minister and Minister of Energy Hon Eugene Hamilton also addressed the significance of the farm in relation to the amount of energy imported into the Federation.

Not only will there be a reduction in fossil fuels but also in the carbon emissions that influence climate change globally.

Prime Minister Harris expressed that this is a step in the right direction for St. Kitts and Nevis to achieve 100 percent reliance on renewable energy in future.

“We are pleased that we can look to the future in the context of the present reality that energy costs are escalating everywhere largely as a result of externalities, an important one being the war between Ukraine and Russia and the disruption or the exacerbating of the supply chain issues relating to the movement of goods and services elsewhere. So when Mr Williams speaks to us about more affordable energy, more affordable electricity, this is good news, and we want to hold Jomo accountable for it and its delivery as soon as is technically possible.”

In 2020 officials broke ground at the Basseterre Valley National Park for the then US$70 million solar farm and storage project expected to provide about 30 to 35 percent of St. Kitts, baseload energy needs for the next 20-25 years while reducing carbon dioxide emissions by more than 740,000 metric tons.

Another solar farm, constructed in 2013, was a joint venture between the governments of St. Kitts and Nevis and Taiwan, SCASPA, the Sugar Industry Diversification Fund (SIDF), and the St Kitts Electricity Corporation (SKELEC). The US $2.5 million solar farm was expected to save SCASPA more than EC$1 million in electricity costs annually.