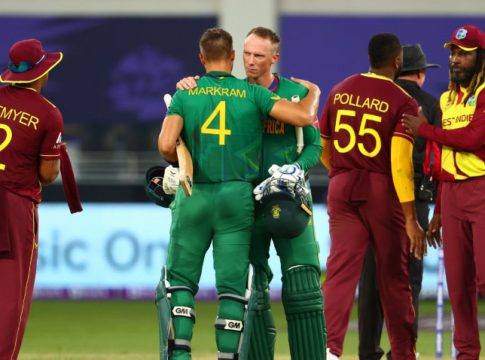 (BBC Sport) Defending champions West Indies are heading towards an early exit from the T20 World Cup after a second successive comprehensive defeat.

Three days after they were bowled out for 55 by England, West Indies saw South Africa cruise to an eight-wicket victory in Dubai.

The Proteas chased down 144 with 10 balls to spare and claim their first win of the tournament.

However, the match is likely to be remembered for South Africa wicketkeeper Quinton de Kock’s withdrawal after refusing to take a knee.

Defeat leaves West Indies needing to win their final three Group 1 games and hoping results go their way elsewhere if they are to finish in the top two and qualify for the semi-finals.

They face Bangladesh in Sharjah on Friday, while South Africa meet Sri Lanka at the same venue on Sunday.

Aiden Markram struck the fastest 50 of the tournament, from 25 balls, to steer South Africa home.

He finished on 51 not out, adding an unbroken 83 for the third wicket with Rassie van der Dussen, who made an unbeaten 43, against a West Indies attack lacking potency.

South Africa’s chase did not start perfectly, Andre Russell producing some magic at mid-off to run out captain Temba Bavuma for two as he attempted a risky single in the first over.

But Markram combined fluency and power, while Van der Dussen played the anchor role, in a superbly-paced pursuit.

On paper, West Indies’ batting line-up is terrifying, but it has not clicked and they are in danger of relinquishing their crown less than a week into the Super 12 phase of the tournament.

After their humbling by England amid a flurry of rash shots, a change of approach was perhaps expected against South Africa.

Opener Lendl Simmons took it quite literally. He poked and prodded his way to 16 from 35 balls without a boundary before falling in the 14th over.

Evin Lewis compensated for Simmons’ dot-ball bonanza and looked like he was batting on another pitch. He struck six sixes in his 35-ball 56, while captain Kieron Pollard made 26 off 20.

But West Indies faltered thanks to the brilliant death bowling of Anrich Nortje and Dwaine Pretorius, who claimed 1-14 and 3-17 respectively as five wickets tumbled in the last four overs.