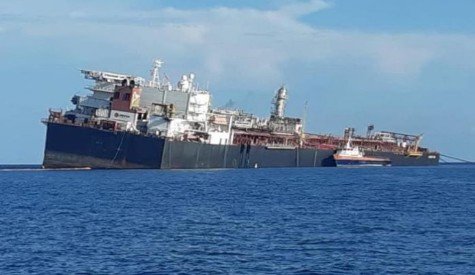 St Kitts and Nevis (WINN): According to an article on Newsweek the Venezuelan-flagged Nabarima vessel has been sitting idly off the Venezuelan coast since January 2019. Pictures recently emerged showing the floating storage and offloading (FSO) vessel floating at an incline, raising fears that it could spill its load into the gulf devastating the regional fishing industry and delicate ecosystems.

The U.S. embassy in Trinidad and Tobago has urged “immediate actions” to prevent a potentially catastrophic oil spill in the Gulf of Paria, off the coast of Venezuela, where a floating storage and offloading facility is reportedly undergoing repairs.

The government of Trinidad and Tobago has reported in a statement released on October 16, that it is in continuous contact with Venezuela in the appearance of the warning that the oil tanker Nabarima, which carries more than a million barrels of oil, may overturn in the Gulf of Paria.

The Ministry of Foreign Affairs and Foreign Affairs of the Caribbean Community (CARICOM) in a press statement expressed that “The Government continues to be concerned about the warning that this event could have a negative impact to the environment.”

The Venezuelan Government has indicated that the vessel was indeed tilting some time ago, but emphasized that they had conducted initial stabilization works on the Nabarima and that it is no longer in any danger.

The department announced that a team of specialists are prepared to investigate the location of the ship carrying more than a million barrels of oil.

Furthermore, the foreign ministry of Trinidad and Tobago declared that it demanded authentication of the information by writing to the Venezuelan Government to make its own decisions on several incidents.

Given this, The Venezuelan Government then agreed to permit a team of Trinidadian experts to traverse the border and assess the Nabarima, however, Venezuela subsequently shifted from the initial position of this being done by the end of September to the current position allowing the inspection team to receive permission to visit on October 20.

The Trinidadian government condemned Venezuela after an ambassador to Venezuela claimed on October 15, that the picture of the tilted ship was mere propaganda.

The US embassy in Trinidad and Tobago demanded intervention in the marine accident although no sanctions would be issued if a potential environmental situation occurred.

However, the United States continues to be concerned about the possible danger to the safety and the environment caused by the vessel.

The embassy also stated that the Venezuelan state company Petróleos de Venezuela, S.A. should take accountability for the event.