Speaker of National Assembly Congratulates Dr. Joyelle Clarke on Her Appointment as Senator 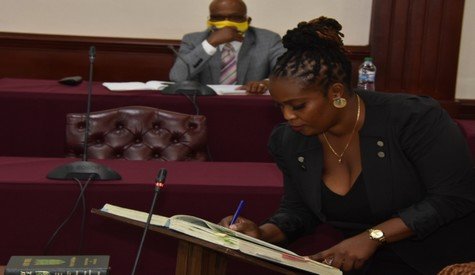 Basseterre, St. Kitts (SKNIS): Speaker of the National Assembly in St. Kitts and Nevis, the Honourable Michael Perkins, congratulated the Honourable Dr. Joyelle Clarke on her appointment as Senator.

“I would like to congratulate and wish Dr. Joyelle Clarke all the best on your nomination and subsequent appointment to the post of Senator. I have been advised that that official appointment took place yesterday by His Excellency (Sir Tapley Seaton, Governor-General) and so I congratulate you and welcome you to this Chamber,” said Speaker Perkins during the August 13 Sitting of Parliament.

The Clerk of the National Assembly, Mrs. Sonia Boddie-Thompson on Thursday, August 13, 2020, administered the Oath of Allegiance to Senator, the Honourable Dr. Clarke, who swore to be faithful and bear true allegiance to Her Majesty Queen Elizabeth II, her heirs and successors according to law. Dr. Clarke will serve as Senator on the Opposition Benches.