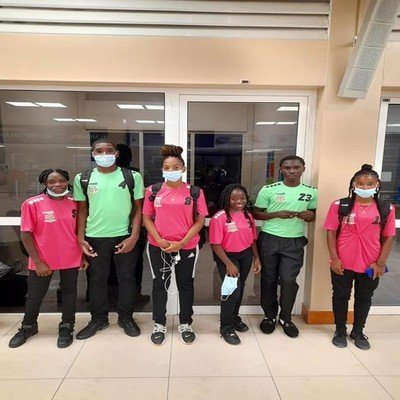 “I am happy to congratulate Kenya Virgo, Adiliesi Gracia, Anjonique Newton and Briana Miranda who have made it to the Under 14 national football female team as well as Jahmal Lewis and Chris Browne who are part of the Under 14 national football male team. These teams are participating in the Caribbean Football Union tournament being held in the Dominican Republic from August 22 to 30. We wish the teams every success,” he said.

He also congratulated Ulinda Warner and Leroy Parris of Nevis, who were selected to be part of the officiating team for the CFU youth tournament.

Onaje Amory, Anderson Amurdan, Jaden Carmichael and Carlon Bowen-Tuckett were selected to the 26-member squad that remains in training in Antigua after the trial matches which began August 8, 2021. Their fellow Nevisian, Akadianto Willett, who was among the 56 talented cricketers chosen from across the region to attend the camp, dropped short of the initial selection.

Following Amurdan’s phenomenal performance during the first match of the trials, Amory unleashed an impressive bowling streak on Sunday, August 22, taking 4-47 off 10 overs.

According to the camp’s match report, “The tall off-spinner continued to show great control and skill as he made it difficult for the batsmen to score freely at the Coolidge Cricket Ground, on Sunday. He broke the opening stand of 81 between Shaq Parris (21) and Anderson Armudan (59), when he had Parris caught at cover by Beckford.”

Armudan, described as a “powerful opener”, put up nine fours and a six on his way to top score with 59 off 49 balls.

Minister Evelyn commended the young cricketers on their selection to the reduced squad and extended best wishes as they vie for a place in the final squad of 18 players that will be selected for the West Indies Rising Stars U19 tour of England. The tour, which will run from September 04 to September 17, will feature six Youth One-Day International matches. Those players will also have the opportunity for selection to West Indies U19 team for the ICC U19 World Cup slated for January 4 to February 3, 2022.

Hon. Evelyn said he continues to be impressed by the level of talent among the youths involved in sports on Nevis.

“Our young people on Nevis continue to show great potential and we should continue to support and encourage them in whatever sports discipline they show an interest in. We want them to know that all of Nevis and all of the Federation are proud of them,” he said.