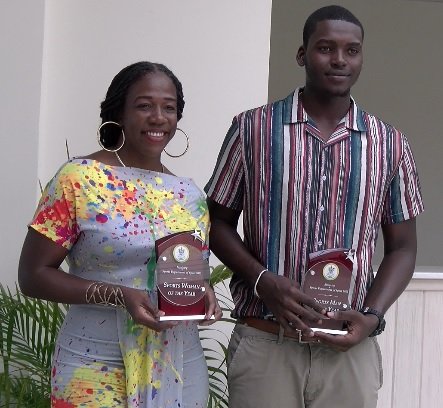 A brief but significant ceremony was held at the Malcolm Guishard Memorial Park, on Tuesday 24th January.

In a presentation ceremony, coordinated by the Sports Department on Nevis, the Sportsman and Sportswoman of the year 2022, were officially presented and awarded for their outstanding performances in 2022.

The ceremony was ably chaired by the Permanent Secretary in the Ministry of Education and Sports, Mr. Kevin Barrett, who commenced the proceedings with a word of prayer.

Director of Sports, Jamir Claxton, noted that his Department and indeed the Ministry of Sports has made it a habit to recognize and award persons who excel at their various sporting endeavours, hence the presentation to the two outstanding individuals.

He also made honourable mention of some other athletes who excelled in 2022: Kamarley Newton, Carlton Bowen-Tuckett, Jalden Myers, Diana Browne and Tiana Liburd.

Minister of Sports, Hon. Troy Liburd, officially recognized the two stars at the head table as Latasha SHANTEL Isles, who excelled in Netball and was the MVP of the local Netball tournament in 2022 and the tall, powerfully built, Onaje Amory, who starred in Cricket, for the Leewards under 19’s, enabling his team to win the Windies under 19 tournament and he also represented the West Indies under 19 team.

He commended both athletes highly for their achievements but took special time out to admonish Onaje to ‘stay on the straight and narrow,’ as he sees him as definite candidate for the Windies senior team.

He also asked former Minister of Sports Hon. Eric Evelyn to say a few words and Minister Evelyn also saluted the two sporting personalities, noting that he was especially pleased that Ms. Isles received the award for Netball, as it was he and his Ministry, who effectively revived the struggling sport, in recent times.

He then presented the awards to the two deserving athletes.

Ms. Isles in a prepared speech thanked God and all who encouraged and assisted her along the way and also thanked the Ministry and Department of Sports for the initiative.
She also encouraged upcoming sportsmen and women to work hard towards excelling in their respective areas of sports.

The tall Onaje Amory, was extremely short in his response: “As the Minister said, I am very humble and shy. Just want to thank my mother and father for what they have done for me.”

His beaming parents were also present at the ceremony.