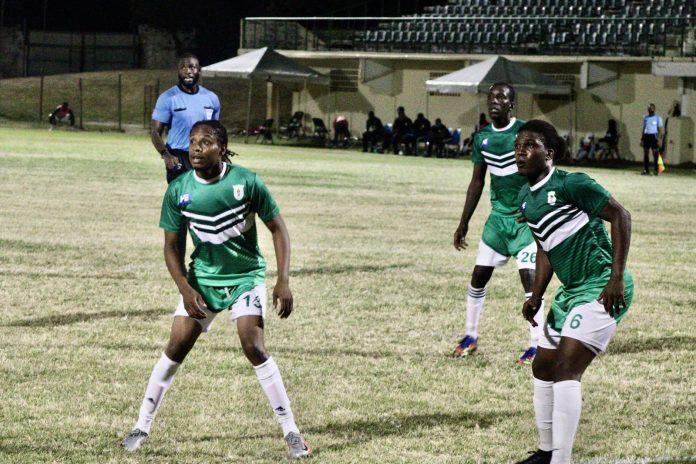 The Central Basseterre Premier League outfit Hobson Enterprises Garden Hotspurs continued their great start to the 2021 season with a narrow 1-0 victory over Flow 4G Cayon Rockets on Wednesday night. Playing before a largely spectator-less stadium due to COVID-19 restrictions, Cayon dominated the match for the most parts but failed to create any real threat to the Spurs defense.

The one good chance Spurs had, they grabbed it—Geovannie Lake latched on to a defensive lapse by Cayon in the 60th minute and rolled the ball into the back of the net. The frustration of not making any progress got to Cayon it seems, as towards the tail end of the match Mervin Lewis, who was the hat-trick hero in their previous match, became the villain with a terrible tackle earning him a straight red card.

Cayon had 14 shots, but only half of those were on target. Spurs on the other had taken six shots with four on target, one of which was the winning goal. Both teams conceded multiple free kicks, 11 for Cayon and 10 for Spurs, but the disparity in corners—eight for Cayon and only 1 for Spurs was a telltale sign that Cayon dominated but have nothing to show for it. Coach Austin Huggins of Spurs praised his players for following through on his tactics especially in the second half. “We made some minor changes in the midfield. We asked the guys to be more aggressive. We also rotated a few of the players and we were able to get a little more energy; a little more runs forward as we instructed the forwards to do,” Huggins said. He further disclosed that they sought to capitalize on the spaces Cayon created and his strategy worked. “We wanted to catch them on the counter (attack) and I think that was evident from the goals that we scored. I must say that the guys stuck to what we wanted them to do in that part of the game and we were successful,” he added.

Manager of Cayon Tyrone O’loughlin lamented the failure of his team to capitalize on their
dominance of the match. “In the second half we tried to pressure them as fast as possible but Spurs really played their defense really good. We let the frustration get the better of us and we didn’t capitalize on our chances,” he said. For the next game, he said his hope is for his players to go back to the drawing board and play a better game to get three points.

In the day’s other match:

Coach Alexis Morris of Old Road regretted the missed opportunity as he felt his team dropped two points. “I am not that pleased. I believe that our team this evening should have walked away with three points. We would have played…an even contest but I believe at the end of the game, we should have scored the goal that would have won us three points this evening. If you look at the first half we gave up a goal in the injury time…we were able to reciprocate the moment and we had it right there at the 90th plus minute and to me we should have won that game quite easily; quite handsomely,” he added.

For Coach Leroy ‘Billy’ Liburd of Rams Village Superstars, he too was disappointed in not getting more out of the game. “I am somewhat disappointed…I thought we were good enough to win the game but for a few mental errors and lack of situational awareness, it cost us from getting a favorable result,” he said after the match.

The SKNFA Premier League continues on Friday and the weekend with the following matches: