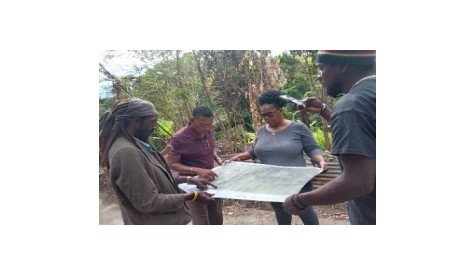 Cayon, St. Kitts (Man and the Biosphere Committee): “The UNESCO-accredited Man and Biosphere site in St. Kitts and Nevis is undertaking a major clean-up and physical enhancement operation, courtesy of funding provided by the UNESCO Participation Programme. It aimed is at enhancing the attractiveness as the only biosphere site in the English-speaking Caribbean Region commissioned in 2011.

The UNESCO St. Mary’s Man and the Biosphere (MAB) Committee has undertaken the task of cleaning up the Cayon River, Hermitage Estate and the Hermitage and Keys Bay areas. These activities are ongoing amidst the setbacks caused by the current COVID-19-triggered restricted movement in St. Kitts and Nevis. The environmental clean-up efforts will be featured in the prestigious Jeju Island Secretariat Newsletter to highlight the positive work done in Islands and Coastal Biosphere Reserves.

The Clean-up Project which was officially launched during the March 24, 2021 edition of the government radio and television show ‘Working for You,’ is timely, and seeks to address longstanding environmental issues that, when resolved would translate to benefits for the MAB Communities of Canada, Keys, Cayon and Ottley’s Villages. Project Coordinator for St. Mary’s MAB, Mrs. Telca Daniel Wallace, said that an extensive Community Outreach Programme is being done as a critical sensitization and awareness component to highlight the importance of the sustainable disposal of solid waste.

The first and second phases of the clean-up of the Hermitage Estate (the proposed
site of the MAB Secretariat) is being done in collaboration with several of the Peace Initiative Teams that operate within the Biosphere Area. The Peace Initiative Team consists of “a group of young men who are being fostered by the government to deter them from criminal lifestyles.” The clean-up had previously commenced at Hermitage Estate on April 19th and has seen the removal of approximately 35% of the overgrowth and debris.
However, all of the physical work has been suspended since June 11, 2021. Mrs. Wallace explained that this has placed a damper on the activities, but the committee is in discussions as to the way forward.

The overall clean-up is spearheaded by the Government of St. Kitts and Nevis, the
St. Kitts and Nevis National Commission for UNESCO the National MAB
Committee and community stakeholders. The sentiments expressed by the
residents of the reserve reflect that these important historical, environmental and
cultural landmarks are finally receiving much needed attention and rehabilitation.

All stakeholders operating within the MAB Communities in particular and the
Federation in general, express appreciation for the interventions associated with
the MAB designation. Thanks to the Honorable Jonel Powell, Federal Minister with responsibility for UNESCO Matters, Dr. David Doyle St. Kitts-Nevis Ambassador to UNESCO; Mrs. Dorothy Warner, Secretary-General to the St. Kitts and Nevis National Commission for UNESCO Mr. Miguel Clusener-Godt, Director of UNESCO Division of Ecological and Earth Sciences, Mr. Massimiliano Lombardo, Program Specialist for Natural Sciences from the
UNESCO Cluster Office for the Caribbean, and the Volunteer National MAB Committee Members are all to be commended for their work in the continued sustainable development of the St. Mary’s Biosphere Reserve.