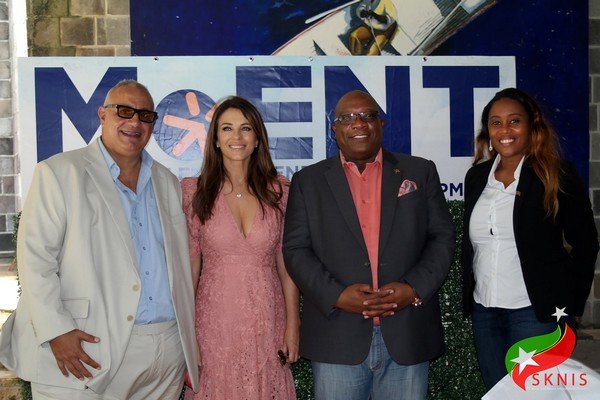 Basseterre, St. Kitts, October 26, 2021 (SKNIS): The Federation of St. Kitts and Nevis is moving to establish a Production Expenditure Rebate Programme to boost the film industry in the Federation, said Minister of Entertainment, Entrepreneurship and Talent Development (MoENT), the Honourable Akilah Byron-Nisbett, during the media event at Kittitian Hill on October 23 where members of MSR Media Group along with the MoENT launched ‘Christmas in the Caribbean’

“MoENT is currently working closely with the Ministry of Finance to introduce an incentives programme in the form of a Production Expenditure Rebate Programme. Similar programmes have been used worldwide and recognized by governments as an efficient and strategic tool to attract high-value inward investment, strengthen local production sectors and build skills, employment, and infrastructure,” said Minister Byron-Nisbett. “It is hoped that with the initiatives that we will be doing with MSR Media it would not just be MSR Media but we will be creating an environment where we can have even more film producers wanting to come here to St. Kitts and Nevis.”

Minister Byron-Nisbett explained that the rebate programme will also be available to local filmmakers, adding that it is a way to inspire homegrown filmmakers to be encouraged to produce films as well.

The minister noted that the majority of film production incentives function as automatic models.

“Production Expenditure Rebate Programmes operate to attract international film producers to a location and encourage local film producers by providing cash rebates for expenditures while filming on location,” she said. “The majority of film production incentives function as automatic models which means that producers undertaking qualifying expenditure can expect to receive a pre-determined contribution to that investment (subject to verification). Qualifying production expenditures are those that must be spent within St. Kitts and Nevis.”