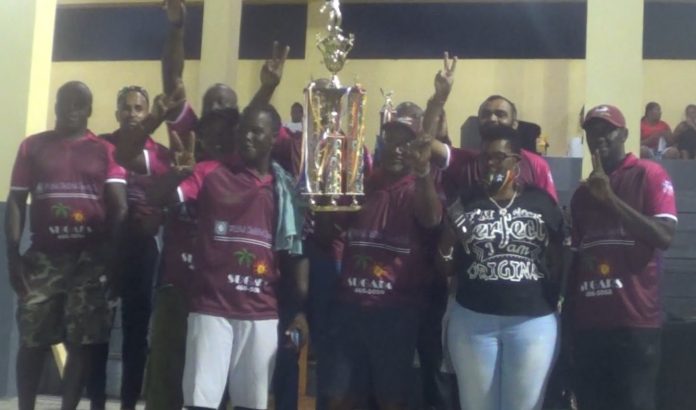 St. Kitts and Nevis (Sports Page) – It was a power-packed Cricketing weekend, at the VOJN grounds, on Saturday 4th and Sunday 5th December.

It was the over 35’s tournament, hosted by the Willful Skillful Sports club, in honour of former Commissioner of Police, Austin Williams.

Three preliminary matches were played on Saturday and then it came down to the finer matters on Sunday.

Then came the grand finale, with the two hitherto undefeated teams, facing off.

Nevis A team versus the St. Kitts Ex Nationals.

A repeat of the grand finals in the Luther Kelly over 35’s tournament, held just two months prior and which was won by the St.Kitts Ex nationals.

The St. Kitts EX Nationals won the toss and elected to bat first.

They struggled initially to get the ball off the square and lost a few early wickets, to compound the problem.

However, skipper Welton Edwards was joined by Al Richards and they put together a crucial half-century stand, which turned their fortunes around before Richards retired hurt.

The ex-nationals eventually got to a competitive 98 for 6, in their allotted 15 overs.

The Nevis A team in response lost both openers cheaply, but Skipper Merlin Liburd and Anan Bhim teamed up in an encouraging partnership.

However, once that was broken, the home team’s batting virtually went to pieces, as Sherman White’s medium pace, suddenly appeared unplayable, as he bagged a fiver, to bowl out the home team for 79.