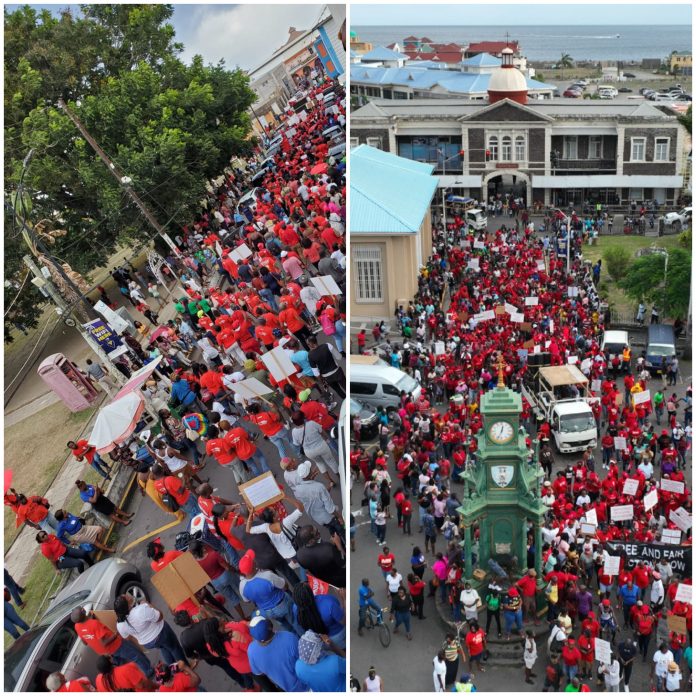 St. Kitts and Nevis (WINN): In a Freedom March held Friday, July 01, 2022, political leaders, candidates and supporters of the St. Kitts Nevis Labour Party and the People’s Action Movement, took to the streets of Basseterre, St. Kitts, in protest against Prime Minister Dr. Timothy Harris and his government.

With more than 30 days left before the constitutional deadline for the next elections, the St. Kitts Nevis Labour Party and the People’s Action Movement are calling on Dr. Harris to announce the election date.

The St. Kitts Nevis Labour Party is also calling on Dr. Harris and the Ministry of Health to remove the travel entry protocols to allow nationals in the diaspora to return to the country to cast their vote in the upcoming National Assembly Elections.

In a press conference held Wednesday, June 29, Chief Medical Officer Dr. Hazel Laws, explained that the decision to have the protocols remain in place is due to the spike in COVID-19 cases in tourism source markets – United States of America and United Kingdom – and in the Federation.

WINN FM was on the scene of the Freedom March and spoke with a protester about his decision to join the March.