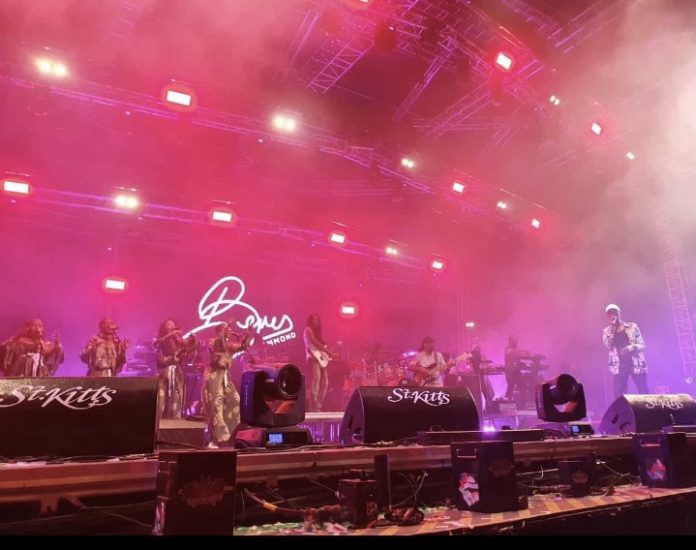 St Kitts and Nevis (WINN): Three days of an experience like no other has come to an end. The staging of the 24th edition of the St Kitts Music Festival was held from Thursday, June 23 to Saturday, June 25 at the Kim Collins Stadium in Bird Rock.

There, hundreds of patrons, regional and local Government Ministers and music enthusiasts from around the world gathered to witness an entertainment event of such magnitude on St Kitts for the first time since the Pandemic.

On night two of the event, there were performances by Ashanti, Wale, Shaneil Muir, Maxi Priest, Sean Paul, I-Mark, HI-Light and Dejour. Anthony B was also listed on the line up to perform on that night, but then communicated that he will be unable to travel to St Kitts for the event.

The effects of the St Kitts Music Festival have been far-reaching, providing open opportunities for homegrown artists to showcase their talents. It also allowed for the promotion of the St Kitts Tourism Product, thus contributing significantly to the economic industry of the island. The funds that turn over annually as a result of the music festival is estimated at about EC 14 million dollars. Despite the negative effects that COVID-19 has had on the economy, about 50 businesses partnered with the St Kitts Music Festival Committee to ensure the staging of the event.

The St Kitts Music Festival was preceded by several supporting activities including, Bar Crawl, Poker Run, after-work lime on Fridays, “Front Stage” at the Independence Square in Basseterre and many different types of fetes. Another popular fringe activity, “White Sands” was hosted on Sunday, June 26 by the Carambola Beach Club. On the entertainment line up were Nicha B, Mr Mention, Allison Hinds, Baby Cham, Elephant Man and Beenie Man.

Val Henry of VH Communications notified WINN FM that the Music Festival Committee usually hosts a Press Conference after the event; but that is yet to be put on schedule and communicated to the public.

The general feedback from patrons of the event is that the festival was a breath of fresh air away from the political turmoil in the country and the lockdown and other negative effects of COVID-19. Most of the individuals who spoke to WINN FM said they had an enjoyable time and are looking forward to the hosting of the 25th edition of the St Kitts Music Festival. Some suggested that they are longing to see Chronixx, the Morgan Heritage and Koffee at the event next year.