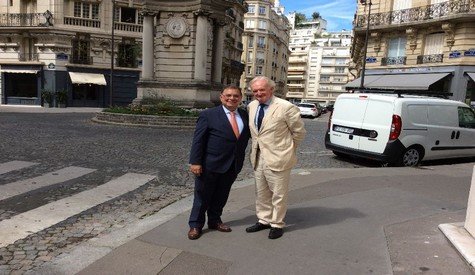 As the diplomatic missions to UNESCO in Paris returned to some semblance of normality after a lengthy closedown as a result of Covid-19, the St. Kitts and Nevis envoy to UNESCO met his counterparty representing Brazil this week to discuss areas of mutual cooperation in relation to UNESCO activities and programmes.

Over a fruitful discussion in Paris, H.E. Santiago IRAZABAL MOURÃO, Ambassador of Brazil to UNESCO and Dr. David P. Doyle, Ambassador of St. Kitts and Nevis to UNESCO, identified a number of areas of mutual interest to both countries, covering the main competencies of this specialised UN agency, in education, nature science and cultural heritage. They were accompanied by Mr Milton de Figueiredo Coutinho Filho,
Counsellor at the Permanent Delegation of Brazil to UNESCO.

Ambassador IRAZABAL MOURÃO, a seasoned Brazilian diplomat with an extensive bilateral and multilateral background, emphasized the importance of St. Kitts and Nevis-Brazil relationships at UNESCO, which had a long history of mutual support for each other’s nominations to UNESCO committees and draft resolutions at UNESCO’s Executive Council.

St. Kitts and Nevis and Brazil are poised to support each others’ candidacies to two important UNESCO committees: Brazil’s quest for a seat on the UNESCO Intangible Cultural Heritage (ICH) Committee this year and, next year, the Federation’s desire to sit on the Intergovernmental Council of the Intergovernmental Hydrological Programme (IHP).

St. Kitts and Nevis and Brazil have both prioritised sustainable water development as an area where UNESCO’s IHP expertise can deliver scientifically-based solutions to the perennial water challenges. A St. Kitts and Nevis seat on the IHP Council is seen as being a factor that would strengthen the Federation’s voice on behalf of the Caribbean developing states (SIDS) in developing a dedicated scientifically-driven water strategy. Brazil has a key interest in the water agenda at UNESCO, as the catalyst behind the Latin American megacities initiative that seeks to address issues and solutions related to water management in the face of climate change.

As regards the UNESCO culture programme, Brazil is placing particular emphasis on highlighting national cultural milestones, including an active role on the ICH Committee, as it approaches celebrating 200 years of Independence in 2022.

On the prestigious UNESCO World Heritage Committee, both Brazil and St. Kitts and Nevis enjoy productive working relationships, as part of three Group of Latin American and Caribbean states (GRULAC), who sit on this body. Both states will be lending support to a draft Decision being tabled at the forthcoming 44th session of the Committee to upgrade the technical assistance, with extra-budgetary funding, for all SIDS, who frequently struggle to prepare detailed submissions of natural and historical cultural sites to the World Heritage List. St. Kitts and Nevis will be the only SIDS member on the World Heritage Committee after the next session and is thus well placed to argue the case on behalf of the 38 SIDS members to UNESCO, with the help of Brazil.

“We consider that Saint Kitts and Nevis, as a prominent representative of the Small Islands Developing States (SIDS), brings an important perspective to discussions within UNESCO, in particular to those related to the management of water and environment”.

He added: “It was a valuable meeting to exchange views about many UNESCO issues and coordinate positions”.