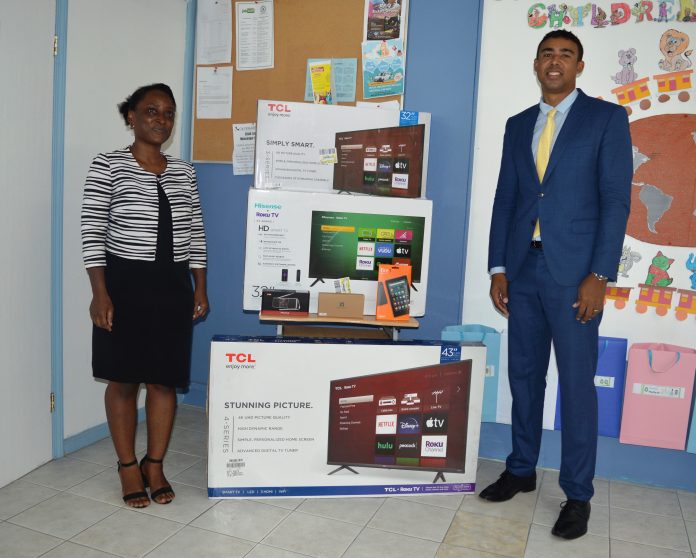 (Press release) The St. Kitts-Nevis Bar Association marked their commitment to the improvement of juvenile justice programmes in the Federation, with the recent donation of entertainment items to the New Horizons Juvenile Rehabilitation Centre (NHRC) at a short ceremony held on July 5th, at the Ministry’s Administration Building, Victoria Road.

The donation, which includes three (3) smart television sets, two (2) portable radios, and one (1) tablet, will go towards the Centre’s Reward and Sanctions Programme, which provides rewards and incentives (such as increased television time) to residents who display positive behaviours or improved conduct.

In chairing the ceremony, Director of the Policy, Planning & Projects Unit, Ms. Azilla Clarke informed that “The NHRC believes that in addition to appropriate corrective measures in relation to safety and security, all residents should know that positive behaviour and constructive efforts at improvement will be encouraged and rewarded. Residents’ success in work and behaviour is measured against their previous performance, not against other residents”.

President of the Bar Association, Mr. Garth Wilkin, remarked that the Association was happy to help support the programming at NHRC. He explained, “During our 2021 Law Week of Activities, we announced our official partnership with the New Horizons Rehabilitation Centre, a programme ably led by our Vice President, Mrs. Sherry-Ann Liburd Charles, who wished to be here today, but could not, due to court commitments”. The President continued by thanking the hard work of Mrs. Liburd-Charles in coordinating the donation, as well as the personal contributions of Law Council Members, Ms. Kurlyn Merchant, Ms. Tashna Powell-Williams and Ms. Talibah Byron. He also noted that the Association wished to endorse the NHRC’s push for consistent and constructive behaviour change, and hoped that the partnership would continue to grow in the coming years.

In offering thanks for the generous donation, Ministry Permanent Secretary Mrs. Janelle Lewis-Tafari lauded the collaborative effort by the Bar Association. “Through collaboration, we are better able to achieve our goals of rehabilitation and empowerment of young persons. It is hoped that by encouraging positive behaviours, we will instill pro-social skills and attitudes in the residents that will remain with them long after they leave the Centre and return to their respective communities as outstanding residents, contributing to our country’s growth and development”, she said.