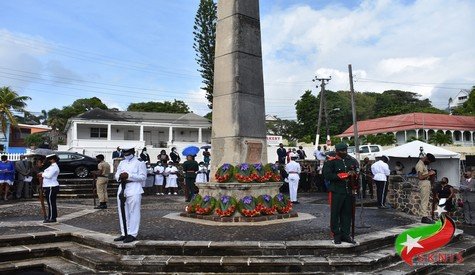 St Kitts and Nevis (WINN): Remembrance Day was observed Sunday (November 8) with a traditional service and laying of wreaths at the War Memorial of Cenotaph on the Bay Road in commemoration of the 102nd anniversary of the Armistice that ended the First World War (1914-1918) and also in observance of the end of the Second World War (1935-1945).

Governor-General Sir S Tapley Seaton and Prime Minister Dr. Timothy Harris laid wreaths in honor of the fallen, a two-minute silence was then observed and the Last Post was played in honor of the dead.

According to history.com World War I, also known as the Great War, began in 1914 after the assassination of Archduke Franz Ferdinand of Austria. His murder catapulted into a war across Europe that lasted until 1918. During the conflict, Germany, Austria-Hungary, Bulgaria, and the Ottoman Empire (the Central Powers) fought against Great Britain, France, Russia, Italy, Romania, Japan, and the United States (the Allied Powers). Thanks to new military technologies and the horrors of trench warfare, World War I saw unprecedented levels of carnage and destruction. By the time the war was over and the Allied Powers claimed victory, more than 16 million people—soldiers and civilians alike—were dead.

According to Britannica.com, World War II, also called the Second World War, involved virtually every part of the world during the years 1939–45. The principal belligerents were the Axis powers—Germany, Italy, and Japan—and the Allies—France, Great Britain, the United States, the Soviet Union, and, to a lesser extent, China. The war was in many respects a continuation, after an uneasy 20-year hiatus, of the disputes left unsettled by World War I. The 40,000,000–50,000,000 deaths incurred in World War II make it the bloodiest conflict, as well as the largest war, in history.