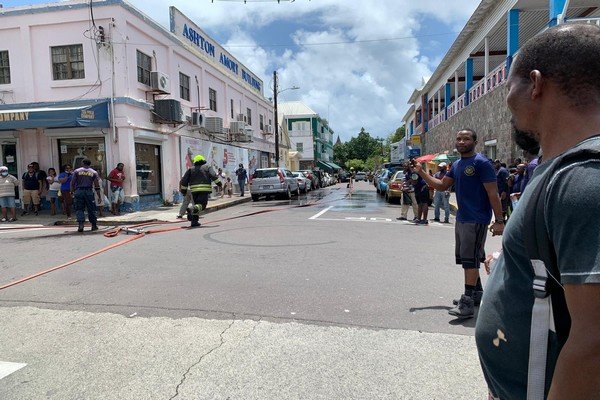 St. Kitts and Nevis (WINN) In celebration of International Firefighters’ Day, the St. Kitts and Nevis Fire and Rescue Services facilitated a run through Basseterre where a fire drill formed part of the activity on Tuesday, May 04, 2021.

“We took part in a run through town. During that run, we stopped on Central Street and Fort Street, and we demonstrated a small fire drill exhibiting our skills as fire firefighters. We gave the public an idea of what it takes to extinguish fires, and we were more than happy to have the run-through in town and give the public the meaning of May 4th.

One can recall 20 years ago in Australia Victoria, five firefighters lost their lives and as a result of that this day was born…and the St. Kitts and Nevis Fire Rescue Services forms part of the World Brotherhood of Firefighters,” Chief Fire Officer Mr. Garfield Hodge told WINN.

An address from the Chief Fire Officer will form part of the celebration of International Firefighters’ Day observed on May 04 each year. It was instituted after a proposal was put forward on January 04, 1999, due to the deaths of five firefighters in tragic circumstances in a bushfire in Australia.