St. Kitts Sustainable Destination Council to be more visible during its tenth anniversary 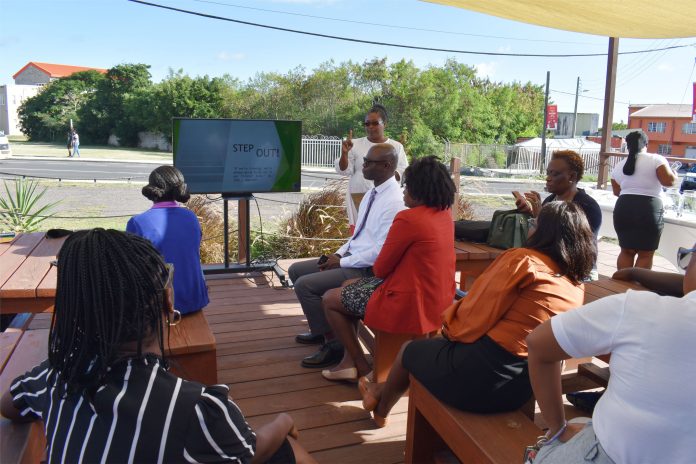 BASSETERRE, ST. KITTS (MMS-SKN) — The St. Kitts Sustainable Destination Council (SDC), which celebrated its ninth anniversary last month (November), will hit the ground running on its tenth year of operations in an effort to make the Federation of St. Kitts and Nevis the destination of choice for discerning visitors.

“What I tried to do in our last meeting in November, was to get feedback from our members as to things that we can do to start the year running because it is the tenth anniversary,” said Chair of the St. Kitts Sustainable Destination Council, Mrs Diannille Taylor-Williams. “We are not going to wait until November to mark the anniversary.”

Mrs Taylor-Williams, who is also the Assistant Permanent Secretary in the Ministry of Tourism, made the remarks on Tuesday, December 20 at an end-of-year meeting with public and private sector members of the Sustainable Destination Council that was held at the Boujee Eats Restaurant in Needsmust, Basseterre, next to the airport roundabout.

“The meeting today, which was not the usual meeting, was meant to be a sort of close-out for the year – an opportunity for us to reflect on the year as an entity and also an opportunity for me to say thanks on behalf of the Ministry of Tourism for all our members, individually and based on organisations,” said Mrs Taylor-Williams.

She reminded the members that the organisation was initially known as the Inter-Agency Sustainable Destination Management Council (IASDMC). But as it grew and evolved and they got feedback from their members who were from different agencies in the public/private sector, and civil society organisations, they came up with the current name, St. Kitts Sustainable Destination Council, which encapsulates the same things – managing the destination sustainably, for the future generations to benefit.

“We will do little things throughout the year, leading up to the celebration of the 10th anniversary and as was said this afternoon, there have been many similar organisations not only in our region but internationally who would not have survived for even five years, and we are going to be celebrating our tenth anniversary,” said the SDC Chair. “That is much for us to celebrate – it is a major milestone and we want to show our appreciation.”

Addressing the members was well known motivational speaker, CEO and Founder of Richardson’s Business Services, Mrs Deigedra A. Richardson, who challenged the St. Kitts Sustainable Destination Council members to ‘Step Out’ of their comfort zones, be visible and not be afraid to do so if they are going make any meaningful change in their environment.

“Even though a situation may not turn out the way the individual would like it to be, look at lessons that you can learn – evaluate them and then strive for success,” said Mrs Richardson. “How do you do that? By taking the opportunity that is before you and using it to climb up mountains to get stamina. Take the small things that you can celebrate, the things that you would have achieved. Even though you have not achieved the end goal, celebrate the small wins. Then look at the end result of what you are hoping to achieve, and refocus so that you can achieve your goals.”

According to the Chair of the SDC, Mrs Taylor-Williams, the meeting with the members of the St. Kitts Sustainable Destination Council was a get-together during the Christmas festive season.

She thanked the motivational speaker saying that she (Mrs Richardson) had presented them with an end-of-year gift in terms of food for thought, that not only reflected and celebrated their wins, but one that also helped them think about what is ahead, where they want to go, and where they see themselves in the coming year in terms of enlarging their reach.

“I think her chosen topic fits right in as if by divine intervention – Step Out, so that you can extend your reach,” remarked Mrs Taylor-Williams. “The meeting was all about giving back to those who would have given up their time and their talent to the Sustainable Destination Council because of course the Council is voluntary, but we can show our appreciation in so many different ways.”

The location of the meeting, next to the Airport Roundabout, brought back some fond memories to the members. When the St. Kitts Sustainable Destination Council (SDC) launched ‘St. Kitts Plastic Free July (PFJ) 2022’ under the theme ‘Be part of the solution – help end plastic pollution’ on Friday July 1, a billboard inviting all to be the solution to plastic pollution was unveiled on Kim Collins Highway at the Airport Roundabout, just a few meters away.

The billboard is still standing, and Proprietor of Boujee Eats Restaurant, Mrs Latreece Christopher, confirmed that she makes sure that the billboard is un-obscured at all times and that she takes pride whenever she sees buses carrying tourists stop there as the tour guides sell their country to the tourists as a destination that is environmentally clean.

“We first fostered a relationship with the Ministry of Tourism last year in 2021 moving into 2022 and we were pleased when they reached out to us again this year, and we thought it is only fitting that they should be our first guests at our restaurant,” said Mrs Christopher.

In explaining why the St. Kitts Sustainable Destination Council were her ‘first guests’ at Boujee Eats Restaurant, she said that they had started operations in 2016 as Deli Fresh, but they then gradually moved to Boujee Eats, which allows them to cater in a restaurant setting to more tourists and locals.

“I have worked with the Ministry of Tourism before and this would be my third time,” said Mrs Christopher. “The first two times we were able to provide them with food containers that are not plastic, which adhere to the Plastic-Free campaign that they have going on, and that is why we ensure that the Plastic Free billboard has to be visible.”