St. Paul’s vs. Village for the Finals 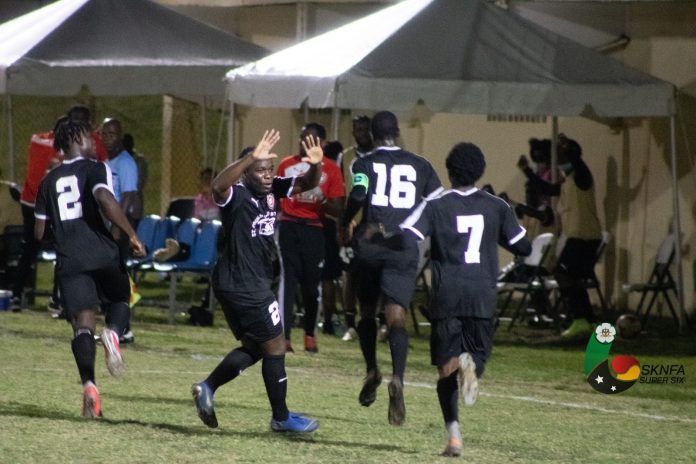 It’s official: S.L. Horfords St. Paul’s and Rams Village Superstars are the finalists for
this season’s SKNFA Premier League after both teams starred in what was a wild
end to the Super Six Playoffs preliminary matches. St. Paul’s delivered a stunning
3-0 defeat to Village on Wednesday night in the last match of the round-robin,
setting up a tantalizing final match up, set to commence this weekend. Man of the
Match for the third straight time—Keithroy Freeman; was the star of the show,
scoring two goals in the 35th and 84th minutes and Anthony Caines in the 70th
minute.

After the match Coach Iroy Jeffers praised his players and declared his readiness
for the finals. “We got the three points and moved on to the finals. That’s all we
needed—three points and we did it,” he said. “We are off (from training
Thursday) and we come back on Friday to get ready for Saturday. We come back
Saturday for the real dog fight war. Real war…(this) football match is war,” he
added.

So based on these results: St. Paul’s topped the Super Six Playoffs table with 10
points; Village are second on eight points and are ahead only on the number of
goals scored to Cayon in third also with eight points. The table is rounded out with Hobson Enterprises Garden Hotspurs on seven points, St. Peters five and Conaree at the bottom of the table with two points. It was a wild end to the playoffs preliminary round as earlier on Wednesday St. Peters and Conaree ended in a 3-3 draw, as Conaree were reduced to nine men at the start of the second half.

Man of the Match was Tyquan Terrell of St. Peters F.C.

Cayon ae lamenting missing their chances of making the finals as they ended up losing to Spurs 2-0 on Tuesday in a match they only needed to draw or win.

Losing to Spurs by a 2-0 margin really hurt Cayon’s chances of progressing to the finals as they were only separated by a goal between them and Village to advance to the finals. But when all is said and done—the regular season points table ring true: Number 1 vs. Number 2. Village Superstars entered the playoffs as the number #1 ranked team and St. Paul’s United number 2. The 2019-2020 Best of Three Finals will determine the ultimate champion.