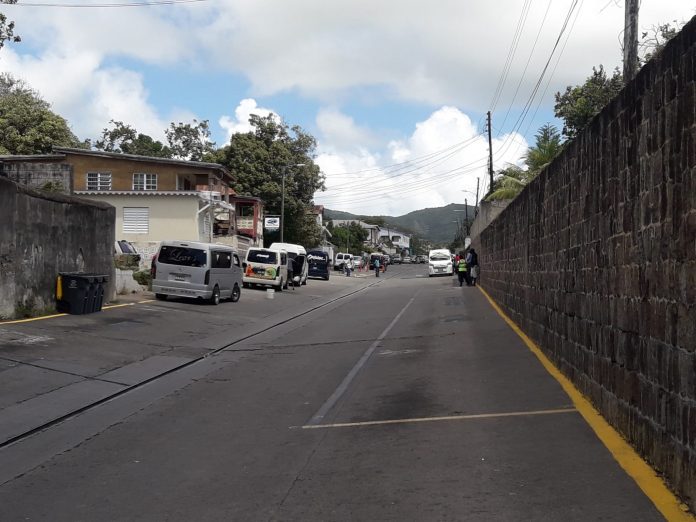 St. Kitts and Nevis (WINN): With the commissioning of the six new traffic lights in Basseterre, specifically the light at the Cayon Street and College Street Ghaut intersection, bus drivers have raised concerns about a lack of consultation on the use of space.

The bus operators were instructed to move further up the College Street Ghaut area, forcing passengers to travel further up the ghaut to board the buses and reach the St. Peters area.

“They came yesterday and said that we have to move up the ghaut, two officers came. Now we reach up the ghaut; vehicles are parked on both sides [double parking], making it hard for us to work, we [are] on a crossing. I find that to be unacceptable. To me, busmen in society are very important, and over the years we’ve been mistreated a lot, especially from the traffic department. One of our fellow busmen was arrested because of a placard saying, “we want a bus stop” he had, I see nothing wrong with that. He wasn’t obstructing traffic or nothing like that. But I guess when you speak out, that’s how things go,” said Caines during a demonstration in the ghaut on March 23.

The bus driver said that while conversations were had with Prime Minister, the Hon Dr Timothy Harris, and suggestions made before commissioning the new traffic lights, those considerations were not met.

Caines suggested that the traffic lights were turned on without provisions for the buses’ new operations. The drivers are calling for a new bus stop and better conditions.

“We want the bus stop because sometimes we have to use the bathroom; I live Gillards Meadow, that’s St. Peters, I have to leave down here [College Street Ghaut] and go straight to St. Peters and use the bathroom. Gas has gone up… We want a bus stop, and we want a better working environment temporarily until they [the govermnet] get this bus stop thing sorted out,” said Caines

Another bus driver said a suggestion was made where the now-abandoned old Basseterre High School could be used as a temporary site as it has the facilities, space and is out the ghaut and out of the way of traffic.

“It was thrown out, and there was a lot of bashing about the condition in which the school is in now, but we weren’t asking for the entire school; we were just asking for the main drive-in entrance [to eliminate this]. Nothing has been furthered on this [matter].”

The bus driver also said that the ghaut is no longer a safe site to facilitate a bus terminal and would impede the residents living and having businesses in the ghaut.

Anthony Phillips of Auto Plus Car Wash, a business owner in the ghaut, spoke about how the new yellow lines have affected his business.

“They run a yellow line straight through my gate; I can’t even park a car outside nothing. When I come with my car, I have to go all the way around Market Street to park on somebody else’s land. When I wash my cars… my property can only hold four or five cars. Sometimes people would come in the morning, drop off their cars, go to work and come back for it in the afternoon. They [the police] didn’t even leave a little spot in from we gate, nothing. My car wash is on the ongoing side of traffic, so no cars will stop before you reach the stoplight going the Monkey Hill side, so I don’t see the reason why they didn’t accommodate me and my neighbour who pay a business license every year, that is unfair for me.”

Phillips said he has reached out to the authorities, made suggestions, and is awaiting a response.

WINN understands that discussions on an alternative for the operations of the St. Peters bus operators are ongoing as the Hon. Lindsay Grant Minister of Transport, Permanent Secretary in the Ministry Carlene Henry Morton and other officials met with the bus drivers today.